How many shades of Mozart 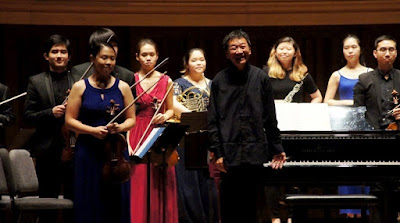 Melvyn Tan was our concert 4 of 6 concerts so far at the Performers(’) present symposium at the Yong Siew Toh Conservatory of Music in Singapore. MT played Mozart and a Mozart-derivative in the Concert Hall with the Conservatory String Ensemble. We were late for the start, missing most of Divertimento K287, played by a smaller string ensemble (2xvln, vla, cello, bs, 2xhorn) without keyboard but then MT came on stage to play fortepiano with this group and the tone changed markedly. One theme that I’ve picked up at these symposium concerts has been the relevance of music despite changes (and some discomfort) over time.

Here was one sterling example: a modernist piece referring to this very work of Mozart’s but all minimal and changing time signatures and recurring snippets and truncations of melodic themes. We loved it. I felt it was played with verve and commitment with the influence of a driving and inviting personality at the core seeming evident. No doubt I missed many references – this requires a good knowledge of the piece or an excellent recall from the preceding performance – but anyone could pick up on lines obviously Mozartian (especially on keys) and enjoy the responses that sounded of modernity and movement. The work was called An airmail letter from Mozart: variations of a theme from K287 and the composer, Jonathan Dove, was in the audience and came to stage for a cheer after the performance. (Other works by JD are on YouTube but not this one; it’s presumably recent). Then, after interval, a return to Mozart performed and led by MT from piano (replacing the previous fortepiano) with a larger ensemble (8xvln, 3xvla, 2xcello, bs, 2xoboe, 2xhorn). This was a lively presentation of Mozart piano concerto no.14 K449 and a return to something of the expectation of an orchestral performance of its time. Again, that strong and inviting personality drawing and leading from the keyboard with a responsive ensemble. A pleasure.

Melvyn Tan (fortepiano, piano) led the YST Conservatory String Ensemble in Mozart and a Jonathan Dove Mozart-derivative at the Performers(’) present symposium at the Yong Siew Toh Conservatory of Music in Singapore.
Posted by Eric Pozza at 12:01 pm