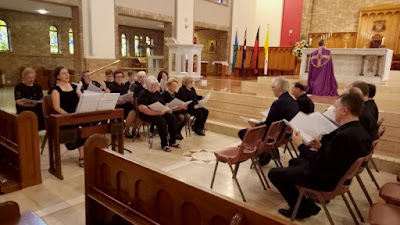 Vespers are an evening sung prayer ritual in the various Christian denominations. We attended a lovely one with soprano and organ at a Lutheran church in Hamburg so I was interested to hear the Canberra version at our St Christopher's (Catholic) Cathedral. This was quite different: Catholic rites (not sure what difference this made); mixed choral; in English. The English removed a certain mystical, otherworldly presence that the German had to my ears, and the architecture in Manuka is lacking age (as was the internal architecture of the Hamburg church which was rebuilt after the destruction of WW2). But they were similar in musical style (as I remember). I guess this is plainsong, if not religiously correct (excuse the pun). The music in Canberra was written on staves, mostly with treble clef and sometimes with a key signature and there was occasional (small, electronic) organ accompaniment and even some harmony singing on a few numbers, but time was not indicated on the lines to be sung. I enjoyed sitting in where invited by the text, and it's linear, scalar melody with just occasional intervals of thirds or fourths and some slurred intervals, so easy enough to read, and no harmonies to find with everyone singing the same line with you. So, perhaps the English version is less ethereal (at least to our ears) but there's history and calm devotion and nice singing and a good opportunity to sing along, so I enjoyed this one.

Vespers are sung monthly at St Christopher's Catholic Cathedral, Manuka. This was the last for 2016: see the website for future dates.
Posted by Eric Pozza at 4:30 pm

Email ThisBlogThis!Share to TwitterShare to FacebookShare to Pinterest
Labels: vespers