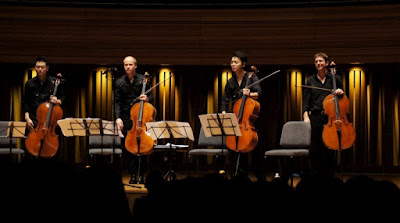 It’s becoming a numbers game. This time it’s four cellists, as in 4Cellists, playing at the Performers(’) present symposium at the Yong Siew Toh Conservatory of Music in Singapore. This was a funny outing. These guys are pop-stars of the classical scene (not meant at all derogatorily) with a young audience and girls whooping and calling names. Megan suggested the Chinese of the group, Li-Wei, was the local star. That may have just been for the two girls behind us or maybe because we are here in Singapore. The Korean or Swede or Swiss girls may have seen things differently in a different location, but it was a pleasure to be surrounded by such a response to musicians playing this style. The presentation was strangely moderate for such pop-sensations, with the only props being sunnies for an encore rendition of the theme of Mission Impossible and only one short patter. The music was undeniably popular but also eminently worthy –

Ravel Bolero, a string of Piazzola tunes and a quieter Monteverdi Pur ti miro. I wondered about the arrangements, for that is key to support this lively and attractive performance. The program names fellow cellist and composer, James Barralet, as arranger for at least some works. Four cellos all have the same range but there was variation in tone, pitch, bowing/arco, chords (sometimes played with what I guessed was plectrums), bass accompaniment, harmonies and the rest. This was eminently obvious in the extended Bolero with its movement of one line between instruments but it carried right through. This was clever use of limited resources with some capable playing to pull it off but this shouldn’t be a surprise: they are well trained players, having met and trained together at the Royal Northern College of Music, UK, and the Sibelius Academy. Good on them. A good niche, an inviting and entertaining performance and screaming girls too. Sounds good.

4Cellists played at the Performers(’) present symposium at the Yong Siew Toh Conservatory of Music in Singapore. The 4Cellists are Song Young Hoon, Claes Gunnarsson, Joel Marosi and Qin Li-Wei (cellos). At least some of their music is arranged by James Barralet (composer).
Posted by Eric Pozza at 12:07 pm