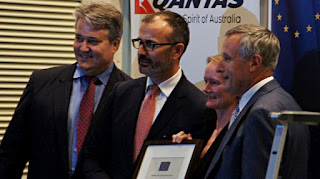 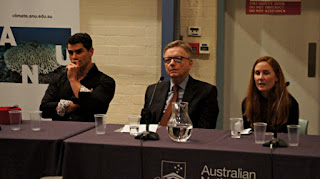 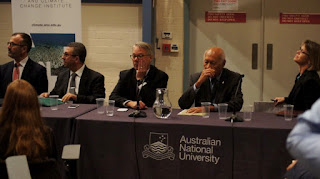 Another COP has come and gone and Trump* is threatening Paris from NYC and the world keeps beating heat records and the deniers deny and the scientist warn and the politicians politicise and it all continues as it always has. Until it does no more. That's the threat of climate change: that it all continues until the window for action if passed and things really change. For the worse. We've been warned. Some suggest Paris was the big change: certainly Kyoto wasn't. There are signs of change, even that action is "irreversible" (we were told this word is now included in official documentation), but the big issue is just how quickly that change happens and whether it's quick enough. There was elation after Paris but some wariness amongst presenters at "A postcard from Marrakech: Implementing the Paris Climate Agreement". This event was a report on COP22, convened, or at least hosted, by the EU Delegation to Australia and the ANU Climate Change Institute. It was a sister event to one after Paris COP21 (also reported by CJ) and I guess we can expect another after next year's COP chaired by PNG and held in Bonn. We were told this COP the "new normal for COPs", more on development rather than decisions, working on the "Rule Book" (no doubt essential but not exciting). The Trump election happened during the sessions and the world changed, but the process is "irreversible", even if the US only comes to it pushed and shoved; also during the sessions, the Paris Treaty was ratified (very positively in 1 year; Kyoto took 7 years); also International Civil aviation made decisions on carbon offsets and the Montreal Protocol agreed to reduce HFC (greenhouse gases but outside Paris); but also a new Potsdam Institute report of climate sensitivities suggested we are tracking higher than previously thought, on track for 4-7degC (!). At least with the "new normal" we are "over the worst of the politics". Other observations: business and non-staters are now central to action; technology is changing unexpectedly rapidly (with implications not least for coal); equity remains an issue (the industrialised countries created the bulk of the problem) but the Adaption Fund and developing country actions are looking better (India and China are sounding good on climate change - immensely better than coal-munching Australia); developing countries need to adapt more than mitigate and South-South networks are developing to support adaption; thermal coal is looking on a steep decline, although metallurgical coal remains an issue; military carbon is exempted from reporting, but interestingly the US Military is progressing very well; business adaption is "quite astonishing" given new tech and awareness that action is now for real; "blue carbon" is carbon in the sea, and it's important and now being considered. Nice to hear our Australian delegation described as "responsive, pragmatic, helpful". I don't find it hard to conceive of our bureaucrats as that, or even our political reps (Julie Bishop and Josh Frydenberg) who are probably at the forefront of a disappointing government. Politics is more difficult than we outsiders allow for: I just hope there's a secret plan to restore sense to this issue in Australia (perhaps that's the Climate Review 2017?). The central theme remained, reasserted several times during the night: there's "no argument change is needed, but how quickly action will happen", or we've "got to go much faster in all directions". But there was one moment of excitement when the Canadian Ambassador outlined actions under Trudeau: introduction of carbon pricing; invitations to scientists to educate Premiers and public; increased transfers to poorer nations; commitment to eliminate coal by 2030; but the biggest, Trudeau's leadership in promoting climate change as the "greatest challenge and greatest opportunity". A breath of fresh air for tired Australian ears. We spoke to the Ambassador after and this doesn't happen overnight, but there's obvious leadership (happily informed by evidence, strange that...). We also spoke to our Australian rep at the event, Jo Evans of Climate Change and Renewable Innovations. She invited our submissions to the review in 2017 and listened to my despair. That couldn't have been easy so thanks to Jo.

*As I write this, I read one of his functionaries is saying Trump will strip funding from NASA's Earth Science division in favour of solar system exploration. Flying blind. God help us. [ Trump to scrap Nasa climate research in crackdown on "politicised science" / Oliver Milman. In The Guardian Australia, online, viewed 23 Nov 2016. ]
Posted by Eric Pozza at 12:13 pm