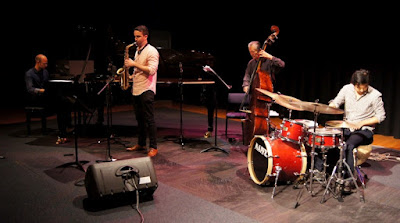 I chatted with drummer Ko Omura about the Japanese tea ceremony and I thought later that the dignity and precision that's part of that ritual was also on view in his band's performance at the Band Room. Orbiturtle is an artists' community; this incarnation was a quartet composed of two Australians and two Japanese players, formed out of a visit by Steve and Dave to Japan a few years ago. Piano and alto are Australians; bass and drums are Japanese; both pairs played together regularly before Orbiturtle was formed. In format, it's a standard jazz quartet; in music, it's quite familiar, too, with tunes written by at least three members, but maybe it's that precision that so impressed me.

They write some devilishly complicated heads, some of which are contrafactuals - melodies written over pre-existing changes. Ko also write a few tunes, and they were similarly interesting: congrats to a composing drummer. The band featured bassist Yoshio "Chin" Suzuki, veteran of NYC and a string of artists, not least Getz, Rollins, Blakey, Liebman, Konitz: a true jazz veteran. But the band was not onesided. This was seriously satisfying and deliciously carefully played. Steve Barry has a huge ability to design lines and follow through with ever perfect connections: chordal, melodic, arpeggiated, substitutions, extensions, polyrhythms, all there and all melding into an exquisite whole. Dave Jackson played with such a sweet and even tone, soft and supportive in the background or clear and stated in solos, always precise but not pushy, easily playing a simple solo line, then doubling and doubling again for flourishes, but again, carrying ideas through, always in easy control and with consistent tone. Chin sat at back, seemingly understated, but brilliantly melodic solos with lovely turnups to finish lines with clarity and some humour and always interesting walks. Interestingly, Chin is from the Suzuki method family (his uncle, I think) and the Suzuki awareness of musicality was evident. And Ko played richly varied drumming - sticks, brushes, a lovely gong that often finished several tunes - with impeccable underlying time that made this all sit with great poise. So, all round good compositions and impeccably precise and satisfying playing. The tunes were mostly from their recent CD (Sakura, listen on Soundcloud) and all original. Orbiturtle are touring the Eastern states with concerts and workshops.