Return to our local 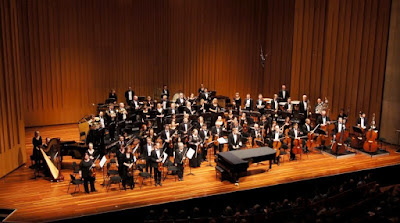 It's a string of orchestras that we've seen recently but now back in Canberra and I was very pleasantly surprised by our own local CSO, Canberra Symphony Orchestra. They had tough competition: we had heard one work done by the Berlin Phil a few weeks before and the Conservatory orchestra in Singapore was very satisfying with its big size and a small space to give a massive sound. CSO held its own. They played a fascinating and attractive piece by Nigel Westlake, Shimmering blue.

Lyrical, punchy, sometimes filmic. Then the Berlin Phil take (interestingly, Berlin Phil had played an Australian piece by Sculthorpe, first up for its concert), Rachmaninov Rhapsody on a theme of Paganini Op.43. They did a great job, capable, expressive, together if not so smooth and seamless as the Berlin Phil (the comparison is unfair, a casual outfit up against a professional selective world leader). I concentrated more on the variations this time, obvious enough in the early parts and towards the end. I didn't follow so easily in the middle. Then the main work, Tchaikovsky Symph no.4 Fmin Op.36. Again, a tour de force. It's a strange work, apparently with a theme of fate and self, swapping themes or overlapping. An overlaid polonaise over a waltz spells out these two ideas but I didn't catch that. I did catch immense loud, busy passages contracting with quiet lyricism. Four movements. The first is long and expansive; the final one is hard biting, starting with a single ff note and continuing with some devilish lines, not least on bass. I was proudly proclaiming our local orchestra as I left for some evident chops, considerable responsiveness and a surprising volume to fill the large Llewellyn Hall. Very well done and much enjoyed.

The Canberra Symphony Orchestra performed Westlake, Rachmaninov and Tchaikovsky under Nicholas Milton (conductor) with Kristian Chong (piano) performing the solo part in Rhapsody on a theme of Paganini.
Posted by Eric Pozza at 12:01 pm