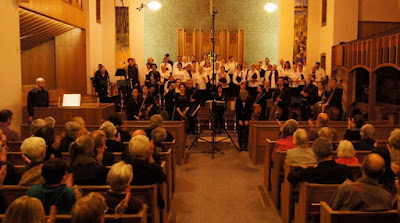 It was a small space for a decent audience and even a smaller one for SCUNA and orchestra and soloists to perform three majestic Handel Coronation anthems and Mozart Requiem. It all deserved more. The Handel is irredeemably satisfying and grand and uplifting. The Requiem is hugely intriguing as well as touching and a little confusing. The confusion is around how much is original Mozart and I've been amused to find out how many people have tried to remedy this. The original completion was by Mozart's young student Sussmeyer and that's the one we generally hear; this completion was by extant

US musicologist Richard Maunder; Wikipedia lists 13 others. Maunder removes a few Sussmeyer parts and adds a rediscovered Amen fugue and makes some other changes. The added fugue was obvious enough, but the removed sections weren't. There were also changes to Lacrymosa which were obvious enough. But the overall work was similar and the early movements appeared unchanged (including to the note level for the bass line that I mostly know). So, interesting and occasionally surprising but essentially familiar. This is a big program and choir, orchestra and soloists did a good job on it if there were some little discomforts. Sometimes, this was interpretation, like when I felt the pace was a bit slow, a function of the audience's recall of a piece. There were some glorious passages in the Mozart. I especially enjoyed the two soloist extremities - soprano and bass - on this outing, and the very neat and capable bottom end of the orchestra - cellos and basses. Again, my attention coming to bear. I also particularly enjoyed the brass, which had such a role in this outing, and the timpani which seemed particularly effective and prominent in this small space. But what a great night of truly great music with the intellectual rigour that Lenny brings to his craft. Wonderful outing.