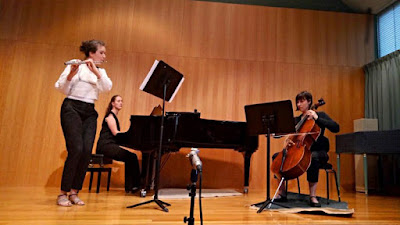 The concert was called Dancing through the seasons. The dancing was Habanera (meaning from Havana, Cuba) and tango, a double time with dotted first beat, developed from the European Contradanse and the local black African influences. Tango was a further development, and Piazzolla is probably its greatest exponent. So, various combinations of piano, flute and cello playing Habaneras and Tangos, and so nicely played. The music was infectious from the first notes. Emily opened with two piano solo pieces, and I could feel the incipient thrills from the very first note, followed by those understated but necessarily precise followers. First up, Bizet with his Habanera form Carmen. Everyone knows it. I loved how she played with a wonderful stolidity. Stolid is a frequent pejorative, but not here. This stolid wrung passion and dignified despair in firm and determined emotions. Lovely. Then Albeniz Tango in D. Another pop tango hit: relatively playful and pensive rather than emotive. Fiona came for Ravel Piece en forme de Habanera, a more complex piece with a modernist lilt and pastoral reflection. Then the major work, Piazzolla Four seasons of Buenos Aires. These are four pieces brought together as one wokr by arranger and friend Jose Bragato. I'm seldom clear in matching the outside world to music and this is not much different, but nonetheless this music is a huge pleasure. Four seasons, starting with Summer, all sudden changes and clearly repeating chords and enigmatic melodies and dense passion and that underlying tango groove (even if the frequent changes make dancing implausible). I've heard Buenos Aires' Maria and seasons and various other Piazzolla and I can only hear it as a massive seduction for the city. Seduction: that seems right for the tango and habanera. This concert was that, in performance and surely in the music. A great pleasure. 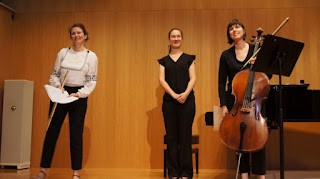