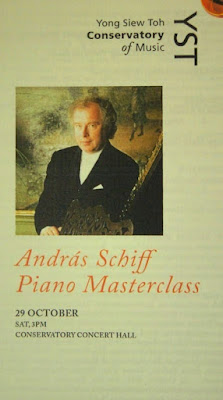 The Andras Schiff piano masterclass was a continuation of our musicians' theme at day three of the Performers(’) present symposium at the Yong Siew Toh Conservatory of Music in Singapore. Melivia Citraavani Rehajo performed Beethoven Sonata no.28 Amaj Op101. Luong Khanh Nhi performed Schubert Sonata Amin D537. Each played the piece then received guidance from AS. As with the orchestra, it all sounded fine to our ears on first performance, but we could follow AS's lessons and heard better as the time progressed. I was stunned to hear the difference in tone when AS played in demonstration: how he simplified and made phrasing or intent obvious but also how the same instrument could sound different under different fingers and bigger under his. Then, there were the comments, often difficult to hear but indicative. Take care with semiquavers - they are not triplets; don't "parachute" hands to the keyboard ("not like karate chop, never"); on playing a march, the military were viewed differently in Beethoven's time; don't play too beautifully but "chisel" Beethoven's second movement, like Michelangelo; the strength in a march comes from the rhythm; note there's humour in Beethoven even if the jokes are lost to modern ears; imagine ourselves into the tune; balance the hands, sometimes highlight the bass, like a cello, or in one passage, "hear the horn?"; "sing" don't hit; what's on the paper is not music until it's played - look at the phrasing; "the metronome is a stupid instrument, the human being is a breathing instrument"; Beethoven wrote this sonata after he got a new London-built instrument with a longer range and he was deaf already - he wrote some notes which he never heard; "there's a German phrase that all good things are in threes"; "when you play p, don't play slower, just softer"; the art of recapitulation is "don't show it, hide it"; use more upper arm, for gravity; "don't forget to dance" (in context of a Sicilian rhythm); drop complexities and repeating notes in practice to find underlying movements; two hands should never be [exactly] together (in this case, when playing 8/9 notes); there was a big difference between music in Vienna and Hannover - Viennese was more "sloppy". This is all out of context, of course, but it was enlightening and invigourating and the improvements were immediate. Fascinating.

Andras Schiff (piano) led masterclasses during the Performers(’) present symposium at the Yong Siew Toh Conservatory of Music in Singapore. The performers were Melivia Citravani Reharjo and Luong Khanh Nhi (piano). BTW, no pics permitted so this program cover.