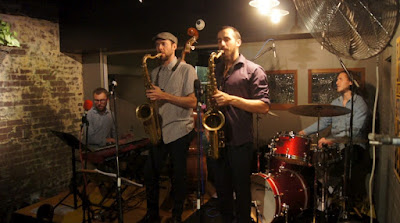 Maybe it's the age of the audience and maybe it's the jazz they started out with but several said how much they enjoyed this gig by the Matt Ottignon and his Tough Tenors. Just straight ahead, blues-infused, 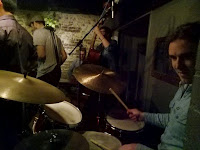 heavily swinging, uncomplicated and earthy (which does not translate into easy to play). Median tempos or up-tempo (even the one ballad, Body & soul, was pretty quick), burning tenor sax with two tenors up front. Tonal, bluesy lines, steady swing and walks, neat piano comping, unison or harmony heads and steady drums. Dirty big tones and satisfyingly twisted lines from hot and sweaty tenors. This may be as serious as your life, but you can feel the joy and even humour. The tunes were from several gatherings of two tenors - Eddie Lockjaw Davis with Johnny Griffin, Dexter Gordon with Wardell Grey, Sonny Stitt and Gene Ammons - but also a few singles - Ellington, Diz, Clifford Jordan, Bennie Motin, Lester Young, Coleman Hawkins. All formative players around the era of bebop and its offshoots. The band was pretty much a recent gathering but it didn't show: they were still blowing tight and together, obviously informed by the various traditions of this art as well as supported by their individual skills (these were some good players). Just a hard swinging night of hot playing with some humour amongst the pleasure. It's getting on to 60 or 70, even 80, years old by now, but how good to return to this formative era.

The Tough Tenors were Matt Ottignon and Chris O'Dea (tenors), Andrew Scott (piano), Tom Botting (bass) and Tim Geldens (drums) and they played at the Gods.
Posted by Eric Pozza at 12:22 pm