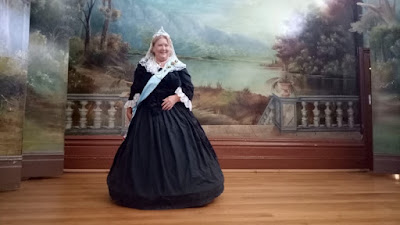 I learnt this today: you address the Queen as Her Majesty, not as Her Royal Highness. Well, I’ll be. It was an interlude of mirth and jocularity and a little vocals when HM Queen Victoria appeared to her subjects at the Clunes Town Hall. The hall is itself an object of considerable interest, attractive despite considerable cracks. 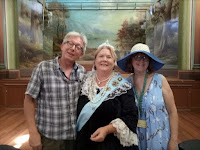 The Queen appeared to lead us in a hymn written for a possible new nation of Victoria in 1860. “To the people of Victoria / This attempt at a National Hymn for our Common Country / Sung at the Theatre Royal Melbourne 1860 / Words by WW Wendell, Music by S Nelson”. We had the words and attempted the melody, but it was not known and still tricky after three verses. The words work with Advance Australia Fair but that’s not the melody. Thanks Rachel. An amusing outing with a tricky melody.

Rachel Buckley appeared as Queen Victoria at the Clunes Town Hall.
Posted by Eric Pozza at 7:49 am