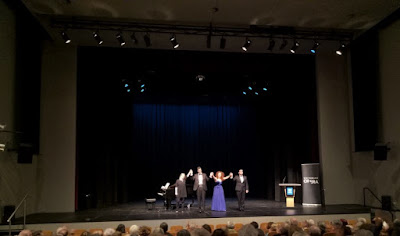 Are all operas romantic comedies? Maybe it’s the Italian blood in them, for most of the arias in this concert were by Rossini or Verdi or Puccini. Just a few from Bizet and Mozart, but they were pretty much in the mould. Why not? Romantic comedies are popular and opera was a popular form in its time. Before TV and movies. The singing was good and there was that stylised acting and we were mostly told of the background so we could appreciate the heroine’s dilemma or the cad’s cad-ness, but I still couldn’t catch much of the language. Such is this singing. I went out singing the final pop-aria to myself and it is seriously catchy (Libiamo ne' lieti calici [La Traviata] / Verdi). Operas aren’t my thing, and more so those collections of best-of arias so I’ll leave it at that. For those who obviously enjoy it, I’m sure the quality was there and the pleasure too.