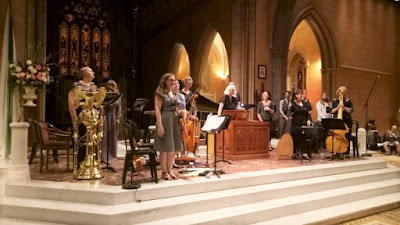 Advent is that annual time of anticipation for Christmas. It means little now for most people, except maybe for the calendars, but it has a history. This concert was a recreation of an Advent cantata concert (Eine Abendmusik) as it may have been heard in C18th Germany. Appropriately, it was held on the altar in the impressive St Patrick’s cathedral. The performers were friends of director and bass vocalist, John Weretka. And perhaps to note, the concert was perhaps the longest I’ve attended here, although still only 90 mins (the concerts are nicely timed at 60 mins). Music was from JC Bach, Pachelbel, Buxtehude, but also a string of lesser known names, Capricornus, Froberger , Schleinm Muller, Bertali, Schmeltzter. The instruments were period, so theorbo and a family of viols, chamber organ and harpsichord, and baroque violin and bassoon. There were five singers, SSATB interestingly with a male alto. There were some faces I recognised, mostly from previous concerts at this festival, but also Rachel Walker from Canberra and Simon Rickards from AHE. This was a gentle concert, not loud in this immense space and sometimes overwhelmed by passing Harleys on the main road outside (especially the solo harpsichord). Vocal numbers were interspersed with instrumentals – sonatas and chaconnes and suites. I particularly enjoyed the vocals. There were some fascinating pairings of alto/tenor, soprano/soprano, soprano/bass in some tunes and I loved the crystalline first soprano (Helen Thompson?). A calm and beautiful set of period musics.