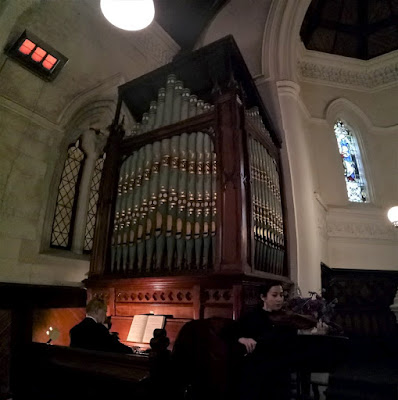 This place was called Snake Valley and the concert was in a lovely old Uniting Church (built Presbyterian, 1861) in a field behind trees on the country road. The feature was a Fincham and Hobday organ. You get to know these names at this event. They were makers in Melbourne and this one dates from 1894. Some problems that appeared during the first up Bach were presumably remedied for the rest of the concert, but this is the nature of such a beast. I expect funds are tight for maintenance. The players were Anthony Halliday and Tomomi Kondo Brennan. AH plays organs around the world, not least in London and Leipzig, and has appeared here before. TKM has a history on violin from Japan through Canada and is now an associate principal with Orchestra Victoria. OV is the Melbourne-based orchestra supporting the Australian Ballet and Opera.

So no slouches. The music was a mix of solo organ and duets from Bach, Handel, Beethoven, Haydn, Elgar, Mozart and Widor and Vitali. There were some tech hitches with the Bach but we could still enjoy the variations in tone and power that pipe organ can display, and some very capable playing of multiple parts. The duets featured the violin, with the organ surprisingly reticent when accompanying but also when taking a phrase. Perhaps the tech issue or perhaps AH’s artistic judgement. I much enjoyed TKM’s bowing as a class in itself, being close up, especially some very effective and even slurs and bouncing passages. Lovely ll round.

Anthony Halliday (organ) and Tomomi Kondo Brennan (violin) performed at the Uniting Church Snake Valley for the Organs of the Ballarat Goldfields Festival.
Posted by Eric Pozza at 10:52 am