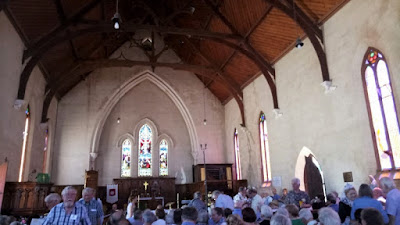 The heat wave continued for the afternoon but it was obvious here at St Paul’s Anglican Church in Clunes. It was hot here, but the concert went on. Douglas Mews returned on organ with Andrea Dainese on flute for one sonata. The music was all Handel. The organ was due for upcoming restoration, lacking in some stops and long pipes and short on pedals, a front of false pipes removed to reveal the square wooden pipes below,

but it filled the space and was responsive and crisp to my ears. This instrument is a mechanical action built by Hamlin & Sons in London ~1860. Only one other organ is known by this manufacturer and it’s in the UK. The music was Handel Excerpts from Rinaldo HWV7; Sonata Emin; Suite Dmin HWV428. The middle piece featured flute. Lots of short movements over three pieces. Stately and intriguing, but located in a hot room with audience flagging. Good on the performers to survive. Intriguingly, next door is the original church, a US-built prefab of style you see in films; common enough in the US but rare in Australia. This town is small but increasingly interesting.