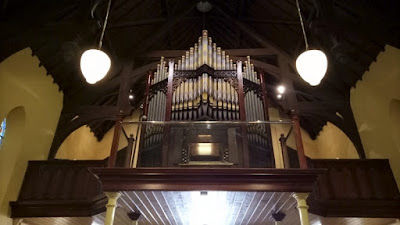 I’m learning about pipe organs. For instance, there are 44 in Canberra (!), mostly in churches, but also in 3 private residences. Also, that there are homeless organs and they get moved. It’s obvious, really, that these loved, artisan instruments are valued by their (mostly) congregations. This concert was in a local town, Creswick, at St John’s Anglican Church, a lovely old bluestone construction from the time of the gold rushes. The organ was another Fincham & Hodbay (1989) which had been gifted by the Barkly Street Uniting Church when they sold the premises.

The move was in 2015 so the setup is recent. It's fully mechanical and unusually the mechanism is visible from the organ loft. Unlike St Pat’s low tuning (well below A=440), this organ is slightly sharp (~A=444). It seems that all mechanical organs are somewhat varied in pitch. Understandable, as they are clearly a mammoth job to tune. Christopher Trikilis is a Melbourne-based organist. He performed a lovely set by Vivaldi arr. Bach, Lemmens, Bach, Zipoli, Mendelsshohn, Bajamonti, Wesley and Dubois. I expect the organ has its own collection of composers. He played wonderfully, with clear enunciation and steady timing and informative chatter. There was some inevitably noisy footwork but this organ is fully mechanical and we were sitting right under the pedals. We learnt of Italian organs having no pedals, thus the Alberti bass: an arpeggiated obbligato pattern moving through chords and inversions (1-3-5-3, etc). And CT was playing with a camera that projected on a screen up front, so we watched his hands and he’d nod to applause. Fun. A lovely concert with great organ and touching venue.