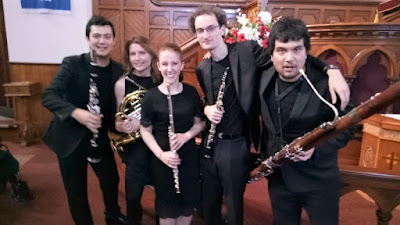 This festival is diverging and that’s good. A festival is a place of concentration, of musicians, of instruments, perhaps of styles, and it’s this that’s interesting me. Also, it’s intense – in the case of festivals like this, two or three concerts a day. It’s musically tiring and here it has me becomign aware of the things I really respond to. To some degree, it also means tuning out from things I normally love and admire, but just doesn’t excite me quite like normal amongst the abundance. Arcadia Winds was a group that tuned me in. Five young players, lighthearted chatter, very informative introductions (like identifying the key features to listen to in each of Ligeti’s six bagatelles), an uncommon format (wind quintet) and some excellent playing. Arcadia Winds were Musica Viva’s inaugural FutureMakers ensemble which gave them recordings and tours and time. They are friends who date back before ANAM, but they formed there. This time, their flute was a sit-in flautist from ANAM, Eliza Shephard. You would hardly have known she was sitting in – great job done there. And being young, they read their new music (a century old now but not baroque/classical) from tablets with bluetooth page turners. So everything was new. It’s not a new audience, but they were feted by plenty of admirers. I was one. They played Ligetti, Bartok, Szervansky wind quintets which I suppose are common enough in this format but fascinating and harmonically and aurally challenging despite Euro-folk roots. And a new Australian work but Lachlan Skipworth, which appears to have been written with them in mind. Whatever, this was a harmonically and tonally fascinating outing with an energetic group on the way up. Excellent stuff.

I love winds --- and I love performers who talk to you too. Sounds great Eric.