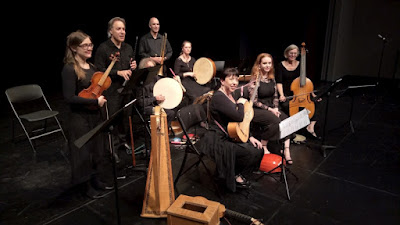 Well, it’s only really a century or so before the classics but it felt like forever. The program was called Echoes of the Celts and the band was La Compania. They are a Melbourne-based group playing early (pronounced er-lie?) music with sackbuts and viole da gamba and cornetti and the like and with a singer who was at home with gaelic. To my ears, this was music to drink by. I could only think of such a band in a field or a tavern with ales and meads and dancing women lifting heavy skirts. And another thought: love songs are forever, not surprisingly going with those dances in taverns. Just about every song was a love song, and mostly by women A later one was a tender song from a grandmother to her long-time spouse and otherwise they were of young love lost or sought. Just one was a political song opposing the Brits and there were a few instrumentals. I enjoyed the sackbut, the early trombone that played the bass line, and the pairing of the violin and cornetto, in unison or swapping lines. And the thuds of percussion and the accompaniment from early guitars or harp or lute and viola da gamba. And singer Lotte Betts-Dean was a standout. I guess she was soprano (ah, the program says mezzo) but I didn’t take much notice of that. This singing was different. Fast as, so even when I could read the lyrics they were tough to hear, but then there was the gaelic and its odd sounds that I could seldom read against the text. They were a bit dour, for the style, but the location was hardly a pub so to some degree that’s expected. But this was a revelation and an unexpected pleasure.