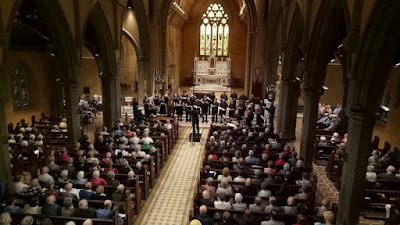 First up was the opening concert at St Patrick’s Cathedral (huge and impressive and reaching for the stars and bedecked with ribbons). The Gloriana Chamber Choir performed with Carlos E Barcenas and Stefan Cassomenos and Argentinian percussion. They started hidden in the choir stalls with chant, unison, high and female, then a second piece of chant, this time in harmony, with mediaeval-like drums accompaniment and a slow walk to the altar. Nice. I liked this one. Then Ariel Ramirez Missa Criolla. It’s a setting of the mass in post-Vatican II non-Latin with accompaniment of South American folk idioms and indigenous instruments. I found this is bit unsatisfying for its harmonies, but others claimed this as their piece for the night. My fave for the night was two movements (3,4) form Joby Talbot Path of miracles, telling of the pilgrimage to Santiago de Compostella. It was sung mostly in English but with some Latin, accompanied by various percussion instruments, using frequent obbligato passages and the like. My favourite for the night. Very nicely sung by the Gloriana Choir, a very strong tenor voice from Carlos and some very decent accompaniment.