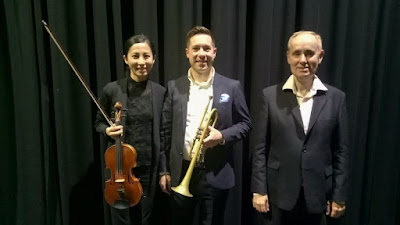 Concert 2 in Castlemaine was a stunner of modern music with loads of international connections in an old-styled town hall, all rows of seats and high stage and musical distance. Nonetheless, it was another stunner. We’d heard Anthony Halliday and Tomomi Kondo Brennan playing duo with AH on organ a Snake Gully. This was a trio event, with Tomomi’s husband, trumpeter Joel Brennan, extensive travel, musical doctorate from Yale and now Senior lecturer in Brass at Melbourne Con. With this trio we could expect fireworks. We got them. A duo (tpt, pno) from Joseph Turin who wrote the music for Nightmare on Elm St and has been commissioned by the NY Phil: Two portraits for flugelhorn and piano (utilising both flugel and trumpet).

Then AH playing Beethoven Andante favore with plenty of rubato and flexibility of tempo. AH amazes me with his playing from memory: he played from memory the other day and apparently has performed Well tempered clavier from memory. He obviously read for the more obscure pieces. The final work was a pairing of two contemporary numbers: Julliard lecturer Eric Ewazen’s Trio for trumpet, violin and piano (apparently he writes for unusual combinations) with a response called Summer breeze from Harry Sdraulig, a recent student at Melbourne Con who was in the audience. HS’s was shorter and more attractively melodic. EE’s was more complex in harmony, interplay, structure and the rest, but this was a much larger work in several movements. So, this was a return to the modern and particularly to contemporary US, with that Australian response and a blast from a storied past. A stunning concert with some fabulously inventive compositions and excellent performances. Loved this one!

Anthony Halliday (piano) Tomomi Kondo Brennan (violin) and Joel Brennan (trumpet, flugelhorn) performed contemporary music and Beethoven at the Town Hall in Castlemaine. Harry Sdraulig (composer) was present for the premiere of one of his works.
Posted by Eric Pozza at 9:06 am