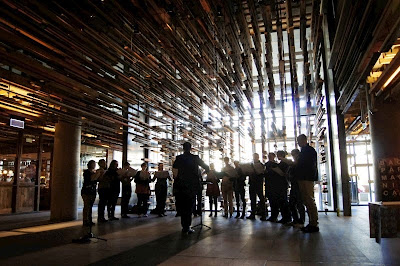 It was a strangely busy and noisy environment for Arvo Pärt but that's what we heard. Coro were partaking of an open rehearsal on the Grand Stairway at Hotel Hotel in New Acton as promotion for their next concert. We will be out of town, so can't make the concert, so this is it for us. For those who can attend, it sounds intriguing. A blend of Bach's Magnificat with Pärt 's seven antiphons and his Magnificat. The Bach is sung by three voices for each of the 5 parts with chamber orchestra accompaniment; the Pärt antiphons and Magnificat are sung by ~18 unaccompanied voices. This rehearsal was for the antiphons and had some interruptions, repeats, discussions with conductor and was out of order, but the performances were still impressive and the music cerebral and unearthly. Apparently this is described as his "holy minimalism" and that seems apt.

These were beautiful voices singing minimal changes but moving consonance and dissonance with small chromatic steps. Intriguingly, the writing does some odd things, like the parts being written in different key or in different time signatures, but to a modern ear it all sits with great meditative beauty. Coro's voices are a pleasure, too. They audition voices for the intent of the choir, then choose voices for specific roles, so the three altos in the Bach Magnificat were chosen to sing that specific role together. I wondered over the beautiful high sopranos singing a sustained high A and noted some incredibly beautiful control in various voices; a tenor comes to mind. This choir can hold a note and this note is precise and unforced. Quite beautiful. Passers by noticed the impact, even if they were there to demo some swing dance of attend the adjacent theatre. Pärt and Bach will be much better served in concert but even in the midst of a hip establishment with goings on and passers by, this was performance of beauty and profundity. Coro are a wonderfully impressive choir doing very intelligent work.
Posted by Eric Pozza at 5:43 pm

Such a fascinating venue ... I can imagine it being a bit noisy for Pärt. I do yoga to one of his pieces. It is so soft. It's impossible to play in the car when we are driving - you can't hear it!

As for swing dance - now that WOULD be fun.