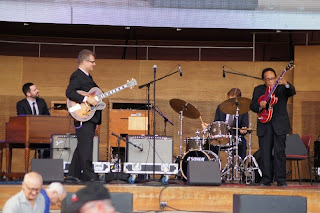 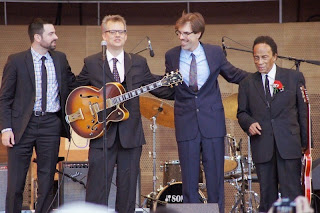 There’s a pavilion at this festival named after Von Freeman. Von is held in high regard here in Chicago, but he’s just one of a family, including son Chico (who I’d seen at an Adelaide Festival in the ‘70s) and brothers drummer Eldridge “Buzz” and guitarist George. So it was with much warmth that the crowd welcomed George playing with the Mike Allemana trio. This was very much a mainstream, straight-ahead set. The trio was Mike on guitar with organ and drums. The grooves were swung, the feel was blues-rich and considerably dirty at times. The tunes were pretty much blowing charts. Firstly, a 32-bar with elaborations on rhythm-changes, a blues, a ballad, a funky dotted quarter-note groove, a 6-feel with cycle changes and an final up-tempo bop blues. George is now 87 so more the slowhand (his history ranges from Louis to playing with Bird, Diz, Roy Eldridge, Sonny Stitt, Ben Webster and a list of names) and he plays the dirty effect to the max, with strummed chromatic chords and occasional cross-neck lines. It’s in marked contrast to young gun Mike Allemana with his clear tone, staccato attack, long eighth note lines, occasional side-stepping and substitutions and switches to 16th notes. This is an organ trio. The left hand bass line was prominent over such a massive PA and the tone of Hammond with Leslie was sweet and changing. Organise Dan Trudell played similar improvisations of tonality with occasional substitutions. Drummer Mike Schlick held steady swings with a light touch and all kept eyes and ears open for the veteran George. In some way this set was a family outing for jazz in Chicago with the respected veteran uncle in the corner and a pair of conservative mainstream Gibsons holding the stage even if George’s detune solo harked back to a funky soulful youth. Good swinging mainstream with a reminder of provocative youth.