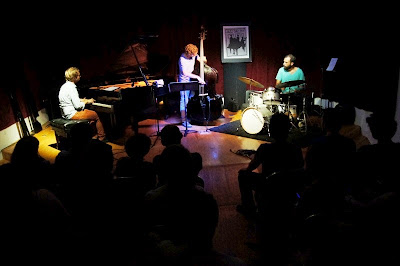 One of the concerts noted by the New York Times (jazz listings on Fridays) was the Aaron Parks trio. He was recently returned from some time in Europe, and played two nights at Jazz Gallery with different sidemen. This was Friday night with Larry Grenadier and RJ Miller. I caught the second set in a very hot, sweaty space. This was a standards/jazz tunes outing with just one original, a gentle 3/4 called Bijou that fitted neatly with the other charts. Think Sunny side of the street, Here’s that rainy day, When in Rome, Lee Morgan and Jackie Byard’s To my wife. Larry’s speed and busyness and tone reminded me of Scott Lafaro. I happened to sit with South Korean bassist Joonsam Lee who agreed but noted Larry’s better intonation. Jazz Gallery is a non-profit and obviously replete with local musos, but more on that later.

Aaron was soft of touch and fluent and inventive and I was thinking Bill Evans. He mentioned seeing Bill Evans in performance on one tune he played. The adventurousness was there, the sense of moving phrasing over time and playing with harmony and the deep concentration (Aaron rocks back and forth on the piano stool). But the lesson I will take away from this concert is their awareness of the melodic flow and essence of a tune. Despite their considerable fluency and exploration, and Aaron’s dissonance and reharmonisation, I could always hear the melody of the tune lurking. The boppers played the changes, often unheeding of the melody. It’s the discussion vertical / horizontal improvisation, but with a keen awareness of the tune being played. Or melody as central with accompanying chords: a singer’s approach. Thinking back, RJ played with a similar reference to the tune. I also noticed a wonderful sense of accenting lines in Aaron’s playing and I imagine this also gives this sense of a tune with its internal dynamics. So, an inventive, conversational and essentially tuneful concert.

The Jazz Gallery has moved since I last visited it. It’s now on the fifth floor, up a rickety lift / elevator (licensed for 12 but with an informal limit of 5; we managed 6). JG is a non-profit venture; memberships are valued and value; non-nonsense around drinks (honour system for wine and water); portable chairs but impressive PA and decent stage and grand piano. They are about to close for a few weeks to refurbish but it’s obvious where they put their money. Only at Small’s have I seen such density of instrument cases. JG was recommended to me before my previous trip. Nice to see its still going strong.