One for the band 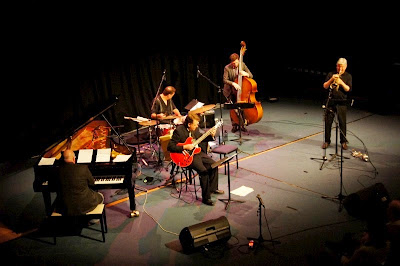 It was the same band, just without a singer (other than Rachael who sang one song). This was the teachers at the School of Music, the local aristocracy of jazz, and they were playing their compositions and a few favourites and it was great. Mike, Miro, Wayne, Mark and new bassist Alec were playing a storm. Right from the start, the tunes were friends. There were two from the Wanderlust stable: Delicatessence and Bronte Cafe, both immensely attractive and infectious. Miro also offered another, Happy world, a new composition seeking a happier place than the current distressing daily news. [I can understand: it's strange how friends and acquaintances volunteer a feeling of despondency these days, but that's for another blog]. I thought of his Peace please; it's another Miro masterpiece that speaks to our common humanity. Then Mike with several of his originals: Standard time and Young guns (he joked of renaming this to Old diggers, given the nature of the tune and that the young guns are now playing Radiohead and the like, rather than the jazz changes), and a lengthy exploration called Contessa Sabra Dalziel (?). Wayne offered a catchy hard bopper called Optimism. Rachael sat in during the second set with a take on the Billie Holliday's heartbreaking ballad, Crazy he calls me ("Like the wind that shakes the bough / He moves me with a smile / The difficult I'll do right now / The impossible will take a little while"). Mike also offered a favourite standard, I'll remember April, and Kenny Wheeler's Kind folk and a blues he'd transcribed that he called Emily's blues. The playing was first-rate. Wayne excited with his broad concepts; Mike's guitar was sharp and genuine and often thrilling in solos; Mark just held it all together and Alec was certain and obviously enjoying the outing. Nice to see some broad smiles and rhythm section mobility on Wanderlust grooves and more. Miro was purposeful and strong and gloriously melodious. Especially during Rachael's ballad, I noticed some wonderful fills but also how Wayne and Mike and Miro didn't step on toes, presumably from time together, but also from just plain class. One friend hadn't come the night before - he steers clear of vocals - but I thoroughly enjoyed them both. Two excellent nights from the best locals.
Mike Price (guitar), Miroslav Bukovsky (trumpet, flugelhorn), Wayne Kelly (piano), Alec Hunter (bass) and Mark Sutton (drums) performed in the Band Room for the ANU School of Music Winter Jazz Week. Rachael Thoms (vocals) sat in for one number.
Posted by Eric Pozza at 11:59 am