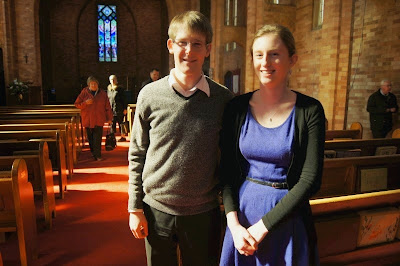 It was the strangest thing to attend a concert and see ... nothing much ... a bare altar. We were at concert of pipe organ and cello with performers James Porteous and Clara Teniswood. The concert was in St Paul's, Manuka, a nice lofty stone church with genuine tuned bells and an impressive organ. But the organ was in a loft behind us and Clara was there with James so the visuals were not too special. But the music was lovely. James performed four tunes and Clara played on two, including Vierne Symphony No. 2 and Bach's Prelude and Fugue in G major BWV 541 and Bruch's Kol Nidrei arranged for cello and organ.

The third was by Saint-Saens, but I've lost the program. The organ is lofty, big, satisfying, seriously deep, so I was surprised that a single cello was so effective, although the tunes with cello were more subdued. Despite the strange orientation, the sound was good and full in the nave. The Bach was attractive and grand and intellectually satisfying as Bach must be. The Vierne was big, impressive, sometimes loud, utilising the organ and its various stops and diverse pipes and tones. The Saint-Saens was more delicate, quieter, essentially a cello piece with accompaniment. The final Bruch was melancholic with cello and organ. All this happened behind us but I like to close my eyes so little lost there, but odd none-the-less. A lovely concert of church music from the concert program of a group I had never heard of, the Royal Society of Church Music, ACT Branch. Well, I'll be! They keep coming out of the woodwork! And they have monthly recitals on church organs around Canberra.