Do as Harlem does 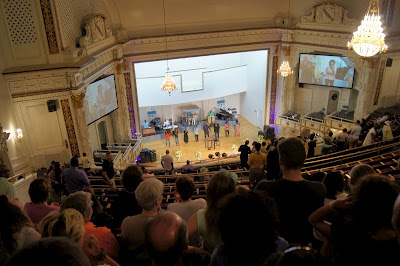 First Corinthians Baptist was the church we ended up in for a Harlem Gospel service. It was an experience but suffice to say I am not converted. There was a strange level of control for tourist visitors, but probably this is required. I did notice some visitors sneaking in videos when they were asked not to, but pics with no flash was OK. The hall was a tiered theatre with decorated roof, boxes, stalls and gallery, and complete with steep stairway to the tourists’ gallery. There was a stark white stage with Proscenium arch and timber floor, a six-piece band (2xkeys, piano, bass, drums, perc.

Amusingly the drummer was housed in a booth and the bassist played a very pretty Ken Smith 5-string), eight dancers, eight singers, a preacher. The sermon was long, on depression / suicide using quotations from Job, in the light of the recent suicide of comedian Robin Williams. This was interesting, a lesson in rhetoric and firm voice, with four rallying emotional peaks, laying hands on a grieving parishioner, denouement with soft piano, hands raised by parishioners in approval. I fear such emotional control but this was in good service and the parishioners really were impressive, joyous, open after the event. I found the occasional disrespect from tourists more troublesome. The music and singing were decent and nicely unassuming. The sound was problematic in such a large and reverberant space. The accents were sometimes difficult to catch. I wondered if, as a tourist outing, this is a little disrespectful, but it’s a common one on the NYC visit and at least we could leave a donation and act with dignity when we were there. I wonder just how it goes down for the community but they allow and manage it, so not all bad. And I was impressed by the themes of Social Media / Social Justice Sunday which included discussion of decent pay and even (a current-day heresy) the rights to form workers’ unions. Not thrilling or successfully evangelising of this recalcitrant but informative.
Posted by Eric Pozza at 8:32 pm