It does not explain everything, nor does it explain nothing 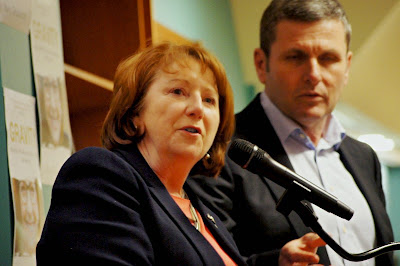 At Julia Gillard's first speech after losing the Labor leadership and the Prime Ministership, I was particularly taken by these words: "... the reaction to being the first female prime minister does not explain everything about my prime ministership, nor does it explain nothing". I think we will think much more highly of Gillard in future than we did a year or so ago. I didn't agree with all her policies (she was often too conservative for me) but she did good work and instigated decent legislation from well founded policy in an incredibly difficult situation, dealing with two oppositions (one within her own party) along the way. I fretted about her communication and it seemed to me that she failed as PM for that is perhaps the key skill, to bring the Australian public with her. But I recognise how strong and brave she was, and how difficult were her circumstances. So with this in mind and intrigued by other views, I attended a book launch of Gravity by Mary Delahunty in conversation with Chris Uhlmann at Paperchain Bookshop.

Mary worked in Gillard's office for a year and has been a politician (State, Labor, Victoria) and journalist. She first talked of Gillard's last day, and how, even on her last day, she had asked of Joan Kirner, who then had serious health issues. Also, how the tone of her office, calm, working, told of her leadership. She considered how, as Deputy PM, she was seen as the most effective in Parliament, but how this had so quickly changed with her accession to PM, so she lost legitimacy and was reviled ("nice girls don't wield knives"). She recognised mistakes, but noted Gillard's strength and competence despite the personal attacks. She observed that "Australians are comfortable with the notion of female power" (think early female suffrage) but Gillard experienced a breakdown of decency (Ju-liar, Bob Brown's bitch, etc) that left the field open for the "nutters". Think Alan Jones' notorious remark that her father "died of shame" (not to forget the "Chaff bag", carbon tax "borders on the treasonous" and "Bring back the guillotine!" comments). Mary observed that Malcolm Turnbull was one of the few who came out against this "vicious and destructive public discourse". Mary thinks this all got to Gillard (not surprisingly; she is human) and at Joan Child's funeral, a few weeks after her father's death, Gillard appeared to be "shrinking". Then that famous Misogyny speech. The strength of that, and the meek response from Abbott and crew were one point of real, emotive, informed communication with the Australia people, and internationally with women. I'd forgotten this, but Mary recounted that it followed a line from Abbott making veiled reference to Jones, that "This Government should have died of shame". I just wonder how Keating would have responded over time to the bitter personal attacks that Gillard received. Mary suggested the three requirements for a good politician are Policy, Purpose and PR. There was talk of that lovely photo of Gillard, taken by 12 year old Sophie with new camera and Down Syndrome, and how it showed her humanity. And talk of more viciousness. Apparently there have still been no apologies over the obnoxious Quail menu. And of the tweets on her 50th birthday, where some rugby league player (Robbie Farah, who's he?) suggested "a noose" for a birthday present and later tweeted that he was not talking of suicide and that people should "lighten up". Again, think licence to nutters. At least he has apologised. Then discussion of the effectiveness of some policy implementation (education as "sector blind / needs based"; I also think climate policy). But also of some failures, like Conway and his media reforms and the State of Palestine vote. Mary reminded us of Gillard's quip that there are 3 people in this marriage (meaning Gillard, Abbott and Rudd). Mary again, that Rudd was "pretty shocking" (and more that I won't quote here) and that Abbott was the most "pugilist" opposition leader in recent history. Questions were about whether the 9 month announcement of the election was wise: "No, I don't think so". Why did her communication change so spectacularly when she became PM: a "great tragedy" but that's not to deny some political errors. Is there less respect for PMs here (vs USA, UK, etc) and what's the role of media and Australian culture: amongst discussion, Mary noted that Gillard "parked her gender" but that her opponents used it. In this gender context, Mary said Julie Bishop has done an excellent job recently on MH-17 but that she is a "protected species" as the one woman in Cabinet: a Liberal members told her "we can't touch her, she's a shiela". Caringly, the last question was about how Gillard is faring now: she's heavily involved in a Global Education project and frequently in Washington DC and Geneva; she has "ups and downs", is sensitive to writings about her and misses policy work and colleagues (there was some mirth and incredulity following the mention of missing colleagues). 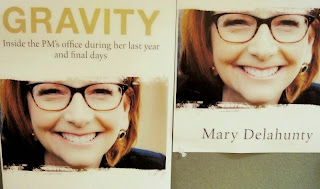 This is a complex story and much more will be written of it all and it's too early to see what views the historians take in the end. It's just one policy, but I can only imagine that Gillard's climate policies will be praised and Abbott's removal will be pilloried. As it should be. She had her weaknesses and made mistakes, but, as happens with many women, she was quietly capable beyond many men of her times, but too quietly.

Mary Delahunty was in conversation with Chris Uhlmann at Paperchain for the launch of her new book: Gravity : Inside the PM's office during her last year and final days / Mary Delahunty. Richmond, Vic. : Hardie Grant Books, 2014.
Posted by Eric Pozza at 12:00 pm