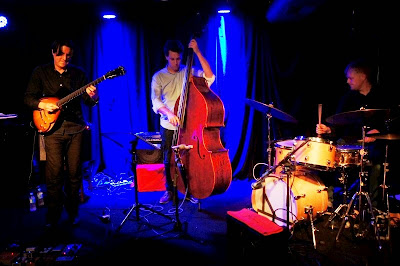 It was Sydney for the night and the choice was Post-bop or New York. It’s annoying when you have a choice like this. I chose NYC. Mike Moreno (of Bar 55 and more) was playing guitar with some mates: Alex Boneham and Ben Vanderwal. These are amongst the best of the locals and Mike was a revelation so this was an absolute pleasure. And I got to visit a new club, Foundry 616. It was also a shorter walk and perhaps this was the decider. I can only rave about Alex and Ben. They are truly inspiring. I was amused to see Ben perusing charts as he played, throwing in little fills of considerable complexity but he’s such a capable and playful player.

Alex was strong, firm, playing incredibly long intervals. This stunned me: Alex was all over this fingerboard. I guessed he was playing 10ths and 11ths and 13ths on one string: long moves, precise, in tune. Alex seems to have a closed-hand technique at times, at other -times, a perfect, neat, spread of the left hand. Either way, it’s a revelation when he plays. But it was Mike who came from the mythical NYC. He was deceptive: melodic, lyrical, then sometimes dropping into the lightest of fills and licks, clearly presented but with a modicum of echo, perhaps increasing during the night, and … and th like. This as light playing, not distorted, spelling the melodies and playing with harmonies but not too daringly. They played had just played together once. Alex mentioned that they were reading, so less comfy but it didn’t particularly look that way. This was hot. There were some originals. Ruby my dear was a favourite standard, but there was also Wayne Shorter and more. I just sat back and took in some fluent playing. Mike fingerpicked with pick under his index finger, or picked with a pinkie for stability. He dropped into discrete sweeps and florid clusters of notes that were stunning, but more notable was a breathtaking ease over the fretboard: fast but not blinding and always expressive and malleable in his phrasing. Despite only playing once together once and concentrating on charts (they were practising as I entered the club ~40 minute early), this was still nectar of the gods. Otherwise, they played Sonny Rollins Airegin, a ballad Time for love, Miles’ Miles ahead, one or two others and some originals. I noticed a common theme of vamps to end the originals: this is a guitar band, after all. A great night. Top NYC meets top Australia. Magical.

Mike Moreno (guitar) led a trio with Alex Boneham (bass) and Ben Vanderwal (drums) at Foundry 616 in Ultimo, Sydney.
Posted by Eric Pozza at 7:42 am