It’s not all the time I stop for buskers, but there are some doozies in NYC. Here are a few I noted. 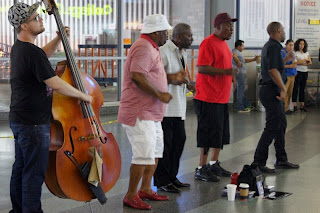 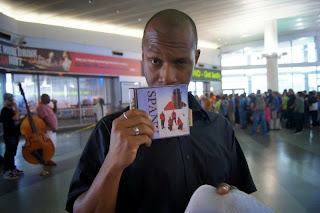 Spank were a male vocal quartet singing ‘60s pop, rich in harmonies and with an immensely welcoming stage presence. We heard them waiting to board the Staten Island Ferry (a quintessential tourist experience and the only free ferry around). There are accompanied by a bassist who knew the jazz scene, but name not known. The band was teasingly called Spank and was very well received. 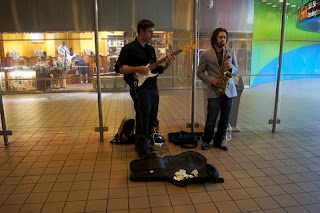 Changing in Subway Station Lexington Av / 53rd St, we heard this excellent duo blowing. Nick Biello (alto) was a force of nature, blowing with Bird-like fluency (although a newer take on bop). He was performing the entire Charlie Parker with Strings album with the Highline Chamber Ensemble the following week but I wasn’t in town to hear it. He’s been a finalist in the International Sax Competition. He was playing with Matt Davis (guitar). I only caught them in passing and no solos from Matt. We were on our way to Marcus Garvey Park in Harlem where they had mates playing in the Charlie Parker Jazz Fest. 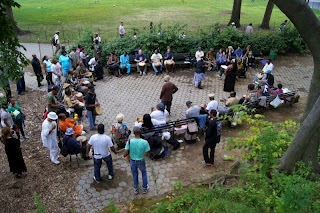 Marcus Garvey Park in Harlem was also the location for a Drum circle. I guess this is regular; I know it’s loud. Earlier on, it was just a few players; by evening dozens, with a flautist and occasional dancers within the ring, a few feature drummers playing embellishments and an incessant, droning, fairly stable rhythm. It mutated as I listened but I wasn’t around to hear it change significantly. The pic is from early evening after several hours (it was around the corner from the Charlie Parker Jazz Fest). Loud.
Posted by Eric Pozza at 9:57 pm