Let’s hear it again for Bird 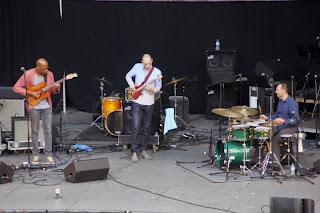 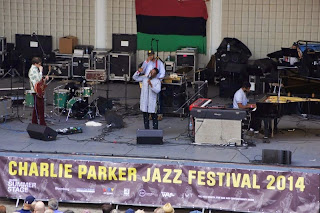 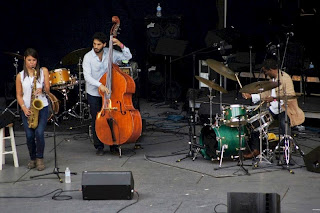 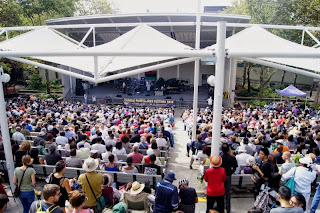 “If it doesn’t have dissonance, it’s got to have swing” So said Joe at the Charlie Parker Jazz Festival in Harlem. It’s a free festival on the last weekend of August, running Saturday and Sunday afternoons. I could get the most of the Saturday session (although not the Sunday session with Kenny Barron, Cindy Blackmore Santana and others). It was in Marcus Garvey Park. Joe is of Italian descent, Brooklyn born, lives in Queens. I was taken aback when he mentioned Norman Connors (his album Love from the Sun is one of my formative albums; it’s not well known, not even available on CD when I looked). I was in awe of his access to jazz but otherwise we shared much. Joe’s comment was in the context of Lionel Loueke playing a form of world music, fingerpicked, sounding plucky like classical guitar, strangely out of place in this lineup. Certainly a long way and possibly unrelated to Bird. He was playing with an Italian mandolin bassist (fast and funky playing, but lacking any complexity in tone) and a drummer. A bit later, following an exciting drum solo, he said “this is more like it” and I concurred. The Wallace Rooney Orchestra was coming up last, but I couldn’t stay. The first acts had been Kris Bowers (piano) quartet with guest Chris Turner (vocals). Nice piano solos and a powerful, punchy solo from Tyshawn Sorey (drums). It was a day for drums. The next band was the Crash Trio led by 25-yo Chilean Melissa Aldana (tenor), last year’s winner of the Thelonious Monk competition. This was a modern trio set, reminiscent of the sixties (she mentioned Sonny Rollins) although playing her original compositions. Competent soloing, fast and with nice clean tone, if a little heavy on scales and practice routines. Her offsiders were Pablo Menares (bass) and Francisco Mela (drums). Again, lots of drum solos but more softly spoken than the other two drummers. This was an outing for listeners and musos alike. Nice to see a (French) horn player arriving with his wife. Apparently this is an outing for musos and their families in Harlem.