Latin as a language 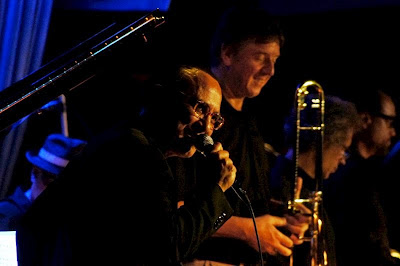 We went early for Blue Note for the Lain side of Horace Silver led by Conrad Herwig with guest Michel Camilo to get decent seats at the bar and we got the two best. There was some waiting outside, but people watching is interesting in this busy entertainment area. The band came on very casually and played a string of tunes by recently deceased Horace Silver. The playing was exemplary and the tunes were memorable. Conrad chatted with the audience, but the crowd didn’t catch his discrete humour and his references for the au courant.

This was great playing but something was missing. The crowd sat as in a concert; the band stood and read. At one stage saxist Craig Handy turned a little and bopped along. I was thinking this, but the arrival of Michel Camilo for the last few tunes just confirmed it. Suddenly the place was alive. Fast, earthy, fleshy. The music showed it, alive with clave forming the beat and the flailing keys on piano and the dense polyrhythms from the congas. This is not at all a comment on musicianship. All the band was impressive and I was blown out by solos before and after Michel’s arrival and alternate pianist Bill O’Connell’s solos were intelligent and played with intriguing dissonance. This is about culture and the difficulty of visiting someone else’s. Michel just had it in his blood and the groove exploded in his hands. The band lifted immensely and immediately, pushed and cajoled and seduced, as were audience, and we were south of the border and it was warm and the music was irresistible. But what of the tunes? There were seven in a set of about 80 minutes. The band played the first one unannounced then Filthy McNasty, Peace and Doodlin’. Michel replaced Bill for Gods of the Aruba, Song for my father and Nutville. The arrangements were great, with those three horns out front. The rhythm section did its latin duty and I was particularly taken by Ritchie Flores on congas for some blow-out solos of enthralling rhythmic complexity. Solos from the horns were stunning. Conrad’s trombone playing was diatonic and to die for, hugely fluent and perfectly phrased and intoned. Alex Sipiagin on trumpet spoke well with Conrad on the heads. I was taken by saxist Craig Handy and his broad palette and inventive soloing. Michel was just volcanic. He introduced his first tune with an unexpectedly gentle passage of piano and trombone duo, but then it was all flailing fingers and hammering hands and floods of notes. The life of Latin. We went happy into the night.