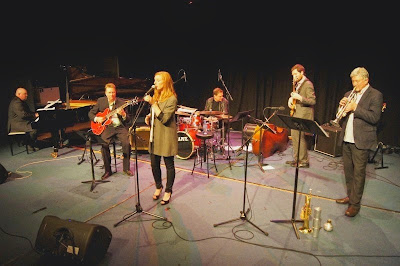 Trish Delaney-Brown was a founding member of a great Canberra - and School of Music - product: the Idea of North. They are a wonderful vocal quartet that I've heard many times on radio but seldom live. They visit often; the hip response is "my bad". This gig was Trish playing for the School's Winter Jazz Week. Trish was singing by herself out front, backed by faculty and friends. The tunes were jazz and popular, standards, latins, ballads, a few originals. Nothing unusual but beautifully done, and collected with a sense of entertainment as well as art. This is the mark of a working musician. My favourite things is from Sound of music so ridiculously well known. So is Hey babe ain't I good to you. But they weren't all like that. Out of this world was a swinger and So what if I don't was slowly swung and Better than anything was 3/4 but with a fast melody and swift triplets and dotted quarter notes over the three beats of the bar, bop-styled. Senor blues was a latin blues with life and The Frog was 32-bar AABA with latin feel and Impressions changes (if I got this right).

But a few slower numbers mostly took my attention. Blue in green from Kind of Blues was played as a duo with Trish and Mike; Jobim's Dindi was a thing of floating beauty; best was a glorious take on a delicious but tormented ballad, If you go, as arranged for Shirley Horn. So, these were interesting tunes and some were lesser known; straight-ahead, lively music, not too daring, but so wonderfully played and swung with much drive. Miro's soloing on this straighter material was a revelation, on flugelhorn or trumpet, phrasing modally, moving through scalar degrees and anticipating and leaving phrases hanging. Mike's guitar was sharp and unaffected and simply expressive. Wayne ventured into dissonance most freely. Alec took just one solo, this one on double bass, with clear phrasing and beautiful tone. Mark was in good cheer, inviting Trish on stage at the start with a classic intro, settling then driving the rhythm with incredible solidity throughout, taking just a few solos that sat with aplomb. I guess Trish is alto. I was taken aback when she dropped to a low note with such perfect tone and technique, by classy articulation on fast passages and by some mobile scat. Such technical competence must be a requirement for a vocal quartet like Idea of North so I was mightily impressed but not surprised. But beyond technique, there was personality and purpose. This was a wonderful, hard swinging, nicely arranged and sometimes beauteous concert. Great stuff.