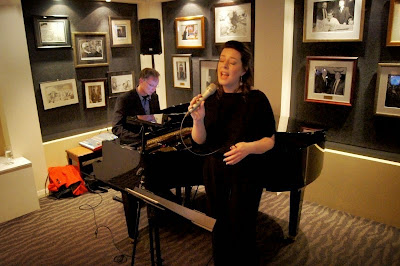 Rachel Thoms was singing with Paul dal Broi at the National Press Club and they are two of my favourite local performers. The NPC is a bar event so there's chatter at the end of the workweek and some dancing and the rest, but there's also a grand piano and a corner and weekly performances of the best around town. We heard a range standards sung with grace and ability. To my ears, Paul was unusually adventurous. I love his take on harmony - he can convert the most plebian of songs into performances of worth. Here he was busy and playful with all manner of variations, rhythmic, harmonic, stylistic, and it was an eyeopener. Rachel is never other than wonderfully controlled in voice, dropping into slurs and vibrato at will and always aptly, with that clear and firm soprano voice. This is just a note, but also a reminder that NPC has our most capable local jazz performers playing each Friday 6-8pm (and blues on Thursdays). Free entry for members and friends.