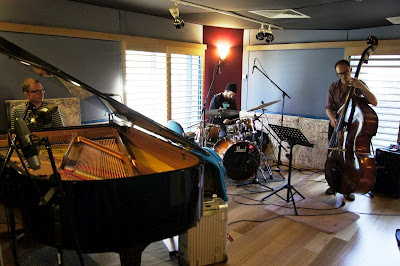 The Benny Lackner trio was on tour through Asia and Australia and NZ with funding from the Goethe Society. I heard them in the quiet atmosphere of the ArtSound studio as they recorded a broadcast for transmission on a coming friday night. All very rushed. Arrive Airport 3.30pm; taxi to ArtSound; coffee and recording; lift to hotel for dinner and a shower; evening gig at Hippo; fly out next morning. This is the life of a jazz player on tour. Despite the frantic pace, the music was laid back grooves, spacious, floating, Euro-styled.

Pensive heads with lyrical, leisurely solos from Benny on piano (impressed by the Yamaha C6 in the studio) that might rush into sixteenth notes then drop back to 8th notes; plentiful lively solos from Paul on bass; drums soloing as occasional fillers or lengthier against an obbligato line. This is a contemporary, rock-aware music with jazz sensibility. His albums include takes on pop (Prince Sign of the times; 99 red balloons) and the ArtSound set included Hendrix If 6 was 9. His albums also touch on the standards although still with a contemporary view. Bemsha swing is identifiable but rhythmically further contorted on bass with an long insistent solo line over. I haven't heard Brad Plus but an intriguing title (Bad Plus meets Brad Mehldau, I guess) Palau was a ballad, an open and airy music box, reminiscent of Ravel. Heartracer was rock groove and moving chords with a hesitating piano over. There's a European awareness here, gentle and pensive, but with a contemporary sensibility. Not for nothing that Benny is from Berlin and has studied with Charlie Haden and Brad Mehldau is his mentor. Not really something for Hippo, but for the studio or a quiet venue, light and airy and searching. You can hear them sometime soon with Chris Deacon on ArtSound's Friday Night Live.

Benny Lackner (piano) led his trio with Paul Kleber (bass) and Matthieu Chazarenc (drums) in a recording for ArtSound.