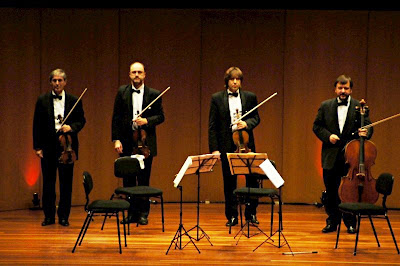 Second of three gigs for the day. We'd booked up a year of classical concerts and the Borodin Quartet for Musica Viva at Llewellyn Hall ended up clashing with a startler jazz gig at Smiths so I only stayed until interval. They were performing Beethoven, Shostakovich and Tchaikovsky and luckily the two I most wanted to hear, Beethoven (String Quartet in G minor, Op.18 no.2) and Shostakovich (String Quartet no.8 in C min, Op.110), were up first. My favourite, and the favourite of most who I talked to at interval, was the Shostakovich. The Beethoven was lovely but relatively sweet to my ears, at least the opening movement. It's an early string quartet in classical form and commentary talks of wit and humour and references to Haydn. The Shostakovich had the bizarre of the newer century (now last century) and I'm pleased to see that we are now accustomed enough to prefer or at least enjoy it. It also had a much heavier theme. It was written in three days when he was staying near Dresden in 1960. It's gloomy and melancholic as a response to the Allied bombing that destroyed the centre of that city on 13/14 Feb 1945. I noticed a strange low drone, which is reminiscent of bombers in the sky. I read of references to various works, of chromaticism and key changes but the centrality of C minor, of a four note motif D-Eb-C-B which in German spell out D(imitri) Sch(ostakovich) implying an autobiographical theme. I listened for very different tones from the two violins to match different roles, for the harmonies of violin and viola or viola and cello, for the lines led by whatever instrument, for the undoubted skills of all the players. No doubt a worthy performance but my appreciation of the string quartet format is meagre and my mind was on the Oehlers by this stage.

Just to end, a note of activities as we arrived. Jazz band Pocket Fox were playing outside, but the most amusing was a "conduct me" opportunity in the foyer with a genuine string quartet. I'm not sure how influential were the conductors but some, at least, looked the part. A champagne glass in the left hand might not be the go, but there's obvious communication in this pic, even if it's just shared mirth.