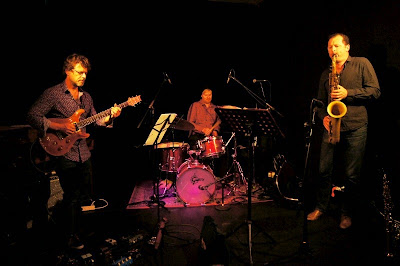 A friend posted to Facebook "Shit just got real" during this gig. She was right. This was the concert of Jamie Oehlers, Steve Magnusson and Ben Vanderwal. These are peak players in the Australian jazz scene. They were visiting Canberra to launch a new CD, Paper Tiger. There was no bassist (Bassless allegations was mentioned as a possible band name, probably in jest), but anomalous lineups are common these days. Steve played some bass lines or fingerpicked and the low notes did the job. Jamie also took an accompaniment role, behind Steve's guitar solos, and this is unusual but given his skills, wonderfully effective. This was choppy music. There was just one swing, as I remember, and one ballad.

This was solid even-eights drumming that had me wondering what passers-by would be discovering. Few rock drummers will play with Ben's sharpness and invention. Jamie's solo lines were ever varied. These players were all this way: profoundly knowledgeable of options and thus fresh in their choices. Steve's technique, too, was choppy. Not smooth and distorted and searing but crisp, twangy, staccato and rabidly fast and endlessly varied. I guess these guys, too, have their habits and licks, but nothing seemed too obvious. Their new CD is 15 short tunes and this performance was pretty much that. The shortest was around 90 seconds and they obviously surprised themselves when it suddenly ended. Even the longest was perhaps 7 or 8 minutes. Jamie's known to play extended solos but this was a different experience. There were originals from all members and wit around the stories to introduce them. The music may be deadly serious, but this band's got the banter. Ben ran a commentary on left communitarianism ("We're all in this together") while denying any interest in politics. Was this banter for the Canberra visit? Ben wrote A song to parallel park to and he claimed to dislike it from the start, only to let it loose on his mates. A rocking chair on a carousel (on a cruise ship in choppy seas) was a song title and a story in itself. Then there were covers: Backhand by Keith Jarrett, Word from Bird by Ornette Coleman, Slow boat to China, Hard times come again no more. This was a challenging mix of contorted or pretty melodies that are developed with immense complexity. Jamie's Lament was a lovely ballad although never too obvious. Paper tiger was rubato, experimental with loops. Slow boat is a lovely old tune but was busily embellished. Hard times was in three and played with relative simplicity. This is a peak experience for jazz in Australia, three of the most capable and inventive players together and on record. It certainly got real; the final slice of the sandwich.