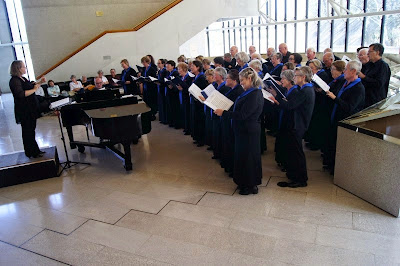 It wasn't courtly music but it was a return to the High Court for a Sunday afternoon concert. This was Llewellyn Choir and they were performing music that featured composers involved in WW1 - Ernest Farrar, Herbert Howells and Gustav Holst - amongst others. This was a time of transition for English composers with the younger generation trained and many lost and yet this led to a rejuvenation of British music in the post-war years. Llewellyn choir is SATB and accompanied. This performance was accompanied with piano by Anthony Smith. It's a capable choir, nicely voiced and carefully dynamic. The sound was airy and lightened with a predominance of female voices partly due to attendance on the day but partly anyway. Tollite Hostias by Saint-Saens was a rousing start. Then To daffodils by Farrar and The scribe by Howells and two movements of a Howells Requiem. Then a few Poulenc motets and This have I done from my true love by Holst. Despite singing of love, this sounded unexcited to my ears, mediaeval in its worldview. And a final Laudamus Te by Poulenc. To my ears, most of the music had a forlorn air but this in unsurprising after the Great War. My favourites sandwiched the concert: the pealing and appealing Saint-Saens Tollite Hostias and the final, vital, exciting Poulenc Laudamus Te. A weighty program but a nice choir to present it.