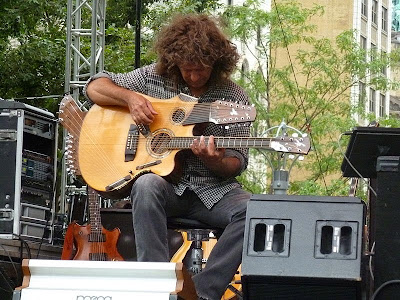 I couldn't help but think California. Pat Metheny is actually form Missouri, the mid-West, near Kansas City, but the hair, the endless smiles, the spirit of innovation and a feeling of cinematic expanse in his music make me think of sun and adventure and West Coast. He visited Canberra on his extensive touring schedule and it was a blast. One big concert that had the drinkers in the audience squirming in their seats (about 2.5 hours including encore; no interval). Pat was on stage right though. The concert was in four main parts. Firstly, Pat playing acoustic with his Pikasso guitar (42 strings including 6 and 12 string necks and two lute-like additions played open string. Then the Unity Group with Chris Potter, Ben Williams and Antonio Sánchez doing five adventurous, but less expansive compositions in a contemporary jazz vein. Then Giulio Carmassi came on, strangely seated behind the band and hidden for me behind the bass amp, and they performed tracks from their new album, Kin <-->; given the length, presumably the whole album. This was the big, cinematic vision with processed richness that defined the night for me. Then a set of four duos: Pat with bassist Ben playing Jobim's How insensitive, a fairly straight take; Pat with Chris on tenor playing Cherokee, rapid fire and concurrent and verging on free; Pat with Giulio including some wordless vocals from the keyboardist; finally Pat with Antonio and sharp nylon strung guitar and precise drum solo. Then a final blues and an encore which was clearly recognised by his followers in the audience. This was a big show, expansive, suited to a stadium with its life-sized performers and over-sized instrumentation (Pat's creation, the Orchestrion, loomed over the band on each side of the stage). Pat's music sounds essentially rocky / pop influenced to my ears (he claims influences from the Beatles, Joni Mitchell and others), his solos sound fairly straight, tonal, but with quirky twists of rhythm and long lines extending over barlines and odd times. He has an abiding interest in tone, playing a range of guitars, controlling synths and ultimately the grand Orchestrion, which I now understand as a guitar-controlled looper controlling a batch of percussion instruments, drums, cymbals, keyboard percussion, organ-like blown bottles (?), whatever, all with associated lighting. Chris provided a straight and jazz-acoustic-toned response to this with bass clarinet, contrabass (or bass?) flute, tenor and soprano saxes played with contemporary sensibility. Ben was punchy and laid a strong groove on double bass and was quick for his one (slightly odd and challenging) switch to electric for a short solo then back again. Nicely done! Antonio was always tight, interestingly capricious at splitting his beats, all concentration but smiling just fleetingly in the final blues of the night. The drums sounded a dream, as they do when a drummer can let go on the skins. It's not something you can quite get in the intimate atmosphere of a jazz club. Giulio was hidden from me and his playing seemed to meld into the Orchestrion and the mass of sound which was this concert although I did notice some sustained chords and piano and those vocals. But I did enjoy it. The whole was a bit loud from where I was sitting, but an involving and inventive outing it was. And another example of hard-working musos at the professional level. Several people I talked to after felt the same, not too knowing of Metheny before the gig but impressed by the night. It worked a charm for me.