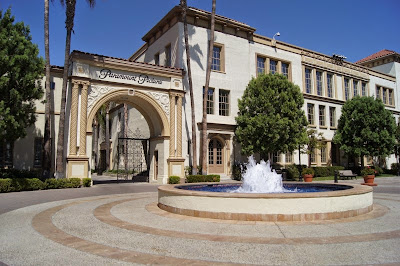 Sunset Boulevard at TheQ was a strange experience. I was taken by the performance. This was seriously capable and well presented and I've only today heard that they are local performers. I'm immensely impressed. I didn't like the real Sunset Boulevard when I was there recently, but there was a mention of street number 10,093 (?) so it's long and it run through hills so there must be salubrious areas than we frequented. I also didn't like the musical. I felt the book (script) was trivial and the music was repetitive (I think it was at the start of the second half that there was an overture and it seemed to only have two themes). One theme for the old actress / toy boy and another for the young writers couple. This may be composition by leitmotif and you certainly knew who was on stage, but it's not adventurous. I laughed when the central character is shot, it being so sudden and unexpected (especially as the killer had earlier attempted suicide). It felt decidedly lunchtime-TV with obvious dialogue and I didn't notice any obvious wit (I heard the Sound of Music script today and it's not high intellectual entertainment but even it has some nifty innuendoes). Maybe it's just me (no lover of either film or celebrity), because the Andrew Lloyd-Webber musical won a swag of awards (Tonys for Best Musical, Best Original Score, Best Book and lots more) and it has an extensive and successful international performance history. But I look at the list of tunes and I didn't know any before and not much after. Much of the singing was conversational (recitative?) but I noted at least three feature songs, for Joe and Norma and Max. I found the stage set fabulous with the orchestra glowing backstage. Joe Gillis (the central writer character) seemed immensely well performed, both in terms of voice and character. The key women around Joe (faded, eccentric silent actress seeking comeback, Norma Desmond, and emergent writer, Betty Schaefer) both played parts and sang very well. Strangely, Cecil B DeMille makes an appearance. The music was an obvious challenge to perform and I was impressed by the quality of performance. So, in the end, my take was great performance of little interesting musical. Many musical goers wouldn't agree (but several mates at the theatre did). Congrats on a wonderful performance.

I don't know this musical at all, though I have heard of it. Would I recognise some of the music do you think.

However, I do need to correct you about street numbering in the US. It seems to have no correlation with street length. We lived in 11970 Winterthur Lane - not a very long street - when we lived in the east. When we lived in the west it was 20645 Via Tapaste. Via Tapaste had 8 houses - with a cup de sac at the end. We believe the numbering has something to do with block numbers or some such.