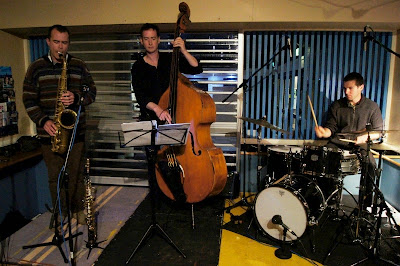 I found a drumming theme in the performance of Ben Carr at the Gods. Ben's a sax player, but his music has plenty of rhythmic interest in the Brazilian music that he plays, choro, but even more so in some tortuous grooves and experimentations. The latin's lovely and rhythmically strong, but nothing like the complexities of Ben's arrangement of Coltrane's 26-2 with a reverse Indian classical take on 9 underlying it, or his musical response to a NYC t-shirt slogan that was dastardly uncountable to my ears, or a composition of the normal drummer in Ben's trio, Phill Collings (ex-Canberra/ANU School of Music), which was all odd times and pantonal,

or Ben's own study of NYC hip-hop grooves called Beat research which counted in 17. The easy melodicity of Pixinguinha and Cavaquinho were a relaxation against this complexity but both styles were a joy. I loved Ben with his long lines spelling chords as in Coltrane and his often strangely clarinet-toned soprano sax (he explained it's in the hard reed and a search for woodiness), and Tom with his heavy reading lines and neat and expressive solos and sit-in drummer Adam with his so-sharp snaps on snare and tom and his classical-Indian inspired cuts to the beat, spacious then snapping with determined dissections. There were a few covers, the Brazilian music of Pixinguinha and Cavaquinho, of course, which were of a different world altogether, and that take on 26-2 which was sufficiently reimagined to deserve considerable rights, and Joe Henderson's Isotope and Alister Spence's Maianbar. This was the exposed sound of a sax trio, clear and demanding and intellectually satisfying. It was a great gig that was too poorly attended.