From across the ditch 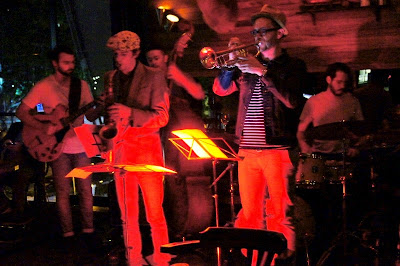 I caught Jake Baxendale last with Luke Sweeting a year ago. The band was Antipodes Quintet and the two had met in Germany. This time Jake was here with mates from New Zealand in his 5-piece format called JB5 at Hippo prior to the full 8-piece band appearing as The Jac at Smiths the following night. They were performing tunes from their new album with compositions by Jake and guitarist Callum. This was not the full band with rich orchestration that's on their website, but the tunes were probably the same and the playing was clean and well rehearsed. I liked these compositions. They were nicely varied in grooves and rhythms with nice harmonies up front on some effective but not too obviously structured heads. The bass and guitar started spacious (one had guitar playing a single note on the beat for extended bars and it worked a treat) but would grow in intensity; the drums seemed generally more urgent and ready to blow. The front horns took their share of solos, of course. Alexis on trumpet had an ease with rapid lines with a nice degree of curliness. Jake's alto was more cerebral, sometimes puckered, other times wailing or imploring, plucking lines and contradictions. This was just more-so while soloing simultaneously. I enjoyed two bass solos by Nick, but especially one towards the end of the night, long and strongly rhythmic and unforced. I noticed one of Callum's guitar solos as simply themed then developed through unexpected dissonance into more speedy playing. This was interesting charts very neatly played, embellished with extensive soloing. Nice and presumably more lush in the 8-piece format. Sorry I couldn't get there.