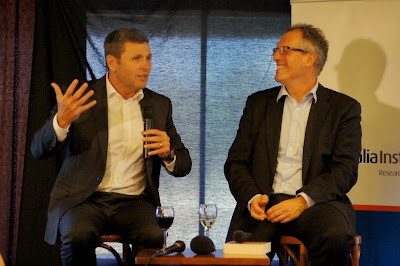 The obvious question is whether truth is stranger than fiction. It was asked and journalist/authors Chris Uhlmann and Steve Lewis cogitated and offered some examples and pretty much agreed that few would accept some of the true stories out of Australian Parliament if they were presented as works of fiction. Chris and Steve were presenting their second novel, The Mandarin Code, at the Australia Institute's Politics in the Pub. It's second of a trilogy and more a thriller than its satire predecessor, The Marmalade Files. There are characters you may imagine are thinly disguised, but this is fiction. Certainly. Our law doesn't allow otherwise (This surprised me. Copyright law allows for satire, but recognised characters can sue authors, presumably under defamation law, and it was mentioned that two lawyers were looking into the Marmalade Files). This is an opportunity for two major Australian political journalists to explore and to some degree expose our politics in ways that journalistic conventions disallow. A range of issues, both local and international, were mentioned. They were mostly in the daily press for the observant, although I wasn't always totally clear on what was and was not being spoken of as fiction. The Chinese Embassy building black site was in our papers. The Information Dominance Center at Fort Mead MD is real (I just risked NSA perusal by Googling it) but is the design like the bridge of the Starship Enterprise and the head's parking space being numbered 007 true? Apparently the transgender security analyst is real. Sending a US Carrier Strike group through the Taiwan Straights apparently remains possible. But is it art? It's certainly useful way to view the world, especially given political spin and control of public perceptions. It's also a "more entertaining read". It's been called "dickhead lit" (it's "fast paced" and there's a bondage scene in the latest book) but Chris is quite happy for it to sell well as airport lit and it's planned as a TV series. There was discussion of how the two write together. Also of whether panties is a valid term these days (Annabel Crabb queried it, but what of VPL?). An audience member questioned their take on the Greens, but the reply was that all parties get some ridicule and that most were concerned about being left out (and it's only Greens that raise this question). Jokingly, Chris and Steve both noted they'd been accused of writing fiction in their day jobs, too. So, worth the read? They noted Canberra as a place of interest and intrigue, especially for those working close, in Parliament, embassies, senior public service, defence, lobbyists and the like. Any capital city must be like this, and those that are built for the purpose are probably more concentrated. I've never been quite close enough, so I have reading to do.

Steve Lewis and Chris Uhlmann presented their latest novel, The Mandarin Code, at Politics in the Pub for the Australia Institute. Their first novel was The Marmalade Files.
Posted by Eric Pozza at 12:23 pm