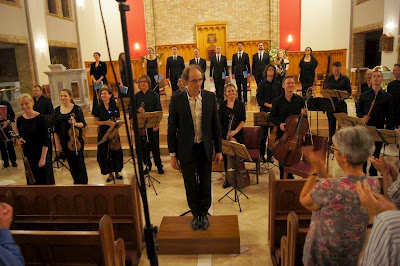 The applause for the Song Company and Ironwood performing Bach's Mass in B minor at St Christopher's went for an unrelenting 5 minutes. I know; I recorded it. It was obvious on the night that the audience was quite ecstatic. I've since discussed with several others who attended and the comments were remarkably similar. Everyone was blown out. The work is a thing of wonder, of course, and the performance did it admirable justice. I loved the fabulously capable voices, and particularly melted over one soprano who cut through especially high and pure and a similarly strong tenor. Our own Tobias Cole made an appearance. Roland Peelman was conducting or perhaps dancing to the music, with the musicians. No baton but expressive hands and body; all involvement and invitation to performers and audience. The bass and cello seemed to have an unrelenting task and presumably also the organ (but this was not quite so visible). The obbligato features of violin, oboe d'amore, flutes, bassoons, horns, were intriguing.

The duos and solos displayed voices as features. The drums interested me, sounding very differently from modern timpanies despite looking similar (not too sure here; I couldn't see too well). The baroque trumpets rang admirably restrained but still imparted great exhilaration and joy. This is the Mass, with Crucifixus and Resurrexit and Credo, all the stuff of Christian suffering and salvation and belief, so there was hope and loss and commitment spelt with the most wondrous of endless baroque counterpoint and canon. Beyond the expression of belief, it's a clear pinnacle of art. There were some quibbles. The balance was not perfect: the 20-or-so musicians, even with gentler period instruments, sometimes overwhelmed the singers; Song Co were just 10 singers, which highlighted the parts but sacrificed some power. The space, too, was quite reverberent so the sound was just a bit mushy. Maybe it's how it would have been first heard, in a church in Bach's days (it is a Mass, after all) but we are pampered now with acoustically pristine concert halls and I would have liked to have heard (and recorded) this in one of them. But the size and intimacy was there, and that's something sometimes lost in pristine spaces. I can only admire the performers, and the work is unquestionable. A fabulous performance to remember.

The Song Co presented Bach's Mass in B minor in collaboration with Ironwood at St Christopher's, Manuka. Roland Peelman introduced and conducted. The names are too numerous to transcribe, but for the techies, the organ was tuned to A=415hz.
Posted by Eric Pozza at 2:14 pm