Visiting my sense of the absurd 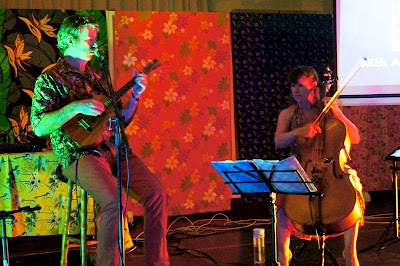 It was my sense of the absurd that had me interested in an Artist's Shed performance of Sergeant Pepper's on uke and cello. It's a great album, of course, and it's personally influential for anyone my age and I have a good feeling towards the Artist's Shed which was the venue (sadly homeless at present). In the end, I gently settled into the familiar strains of Sergeant Pepper, sang along although occasionally limited my performance for respect of nearby seats, admired the take on A day in the life (how was that possible on uke & cello? Hint: they used some voice), felt disappointed that there were (otherwise) no vocals, struggled for the sound of the cello amongst muddy low notes, wondered if the tracks were shortened given no vocals needing repeats, generally revisited a landmark recording. I enjoyed it and admired the take. There was some nice and unpretentious playing by both uke and cello. They played side one (this was an LP so it had two sides; we tend to forget that now) then side two, each as a medley.

They performed with accompanying projection of song title with related cute image. The audience was of an age to not require the titles. Then another set, with a string of century-old songs, or in style of, and a successful take on Russell Morris's The Real thing (and a threat of In a gadda da vida, this being a night of some boomer nostalgia). The encore was What a wonderful world and that was Louis Armstrong so this was jazz, wasn't it? I remember Wonderful world as my theme song for a Christmas many years back and it's probably the first "jazz" that I remember enjoying. The show had started with the collected forces of UROC (Ukelele Republic of Canberra). They had fun and I liked their repertoire (Divinyls and Kinks and Amy Whitehouse meets Herman's Hermits and Nancy Sinatra) and this was mostly assembled strumming and singalong with just a few harmonies and a Beatles bass. I sang along and enjoyed it and worried that the guy in the next seat might object. There's a whole world of music and performance that prioritises entertainment over art and it's not something I visit too often. I should; it's fun. It's nice to sing along. But after hearing a trio of authentic virtuosi the night before (and even paying a few dollars less), I left a bit bemused about the status of the arts in our community. But nothing new there. BTW, you can see YouTube videos of this take on Sgt Pepper's embedded on AJ Leonard's website.