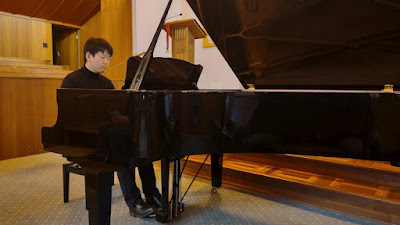 There was some very satisfying playing, of course, on organ and piano, so similar and yet so different.  This was Linus Lee playing in the church at Wesley.  The title of the concert was also its theme, Tunes from faraway, varied in source and culture, but related in the pleasantness and joy of the music.  I mentioned joy lots when I was reporting on the OWJF.  Some bands just had that sense of entertainment, others were heavier, maybe more serious, but I doubt it.  As for chops, they were all to perfectly capable.  So it's not ability or conviction that associates with joy or even serious intent.  Maybe it's just these difficult times that prompt me to hear joy and I did here, too, with Linus.  He talked of programming for a lunchtime concert, and that's also part of it.  So we got Ballet Egyptien by a Frenchman with an Italian name, a Persian market by Ketelbey and later Mussorgsky and the national dance of Ukraine (a Russian writing Ukrainian song; again a marker, or not, of the times).  Those were all on organ.  On piano we had American Edward MacDowell and 5 forgotten fairy tales and Granados Capricho Espanol (Spanish writes Spanish) and Coleridge-Taylor Danse Negre (an Englishman in Africa and possibly spurned these days).  The organ was its soft and deep and full self and the piano punchy and percussive and loud.  But in all, an entertaining and fascinating concert played really nicely.  Thanks to Linus.