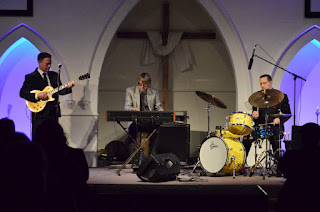 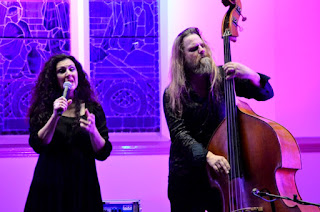 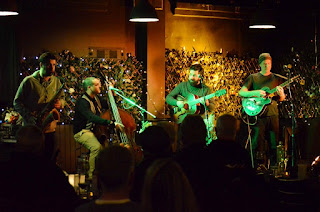 I went off to the Baptist Church and got something somewhat at the other end of the spectrum, Ray Beadle trio.  This was blues guitar (the goldtop Les Paul was fitting) with keys and drums.  Ray sang occasionally.  This was very professional, neat, not overly adventurous, entertaining.

Then probably the find of the night, Virna Sanzone with Phil Stack.  It takes chops for both artists to carry this out effectively, just vocals and double bass.  I was entranced with some great singing, professional mic control, great songs and telling lyrics.  And that bass playing.  Phil was adventurous, out on a limb, sometimes not quite finding what he was seeking, but absolutely committed, hugely fluent and dynamic.  This was a joyous and awesome find.  Did they mention it, or did I think it: jazz adjacent.  So true.  Tunes by Leon Russell and latins and Around midnight.  Loved this one.

Big day; getting to the end, but after finding the pub and some company, I would miss it.  To end, I was back to the Lord Anson for Cope Street Parade.  Now, how apt is a jazz festival finishing with its history, New Orleans, Everything you do, Bourbon Street Parade, Nat King Cole, When I get too old to dream, 2 feels all round.  Great stuff nicely played.  I left passing the musos corner at the pub noticing bassists together.  Also an apt finish to a festival.

So how was the festival?  Some great playing.  Opportunities to catch all manner of styles and players, some of Sydney's jazz luminaries and upcomers, all worthy to fabulous, all together in time and space.  Not at all surprising given SIMA's involvement.  I think the town was happy, too, and I know it's due back next year.  Queen's Birthday weekend, 2023.  Keep it in mind and bring your warm jackets.