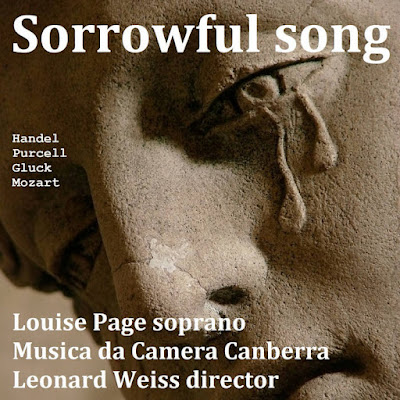 We remember this concert with much reverence.  It's not a recent concert.  It was from 4 years ago at one of our favourite venues, St Peter and Paul, the heavy bluestone Catholic cathedral in Goulburn with the wonderful acoustics.  The group was Musica da Camera and our guests were Louise Page and Lenny Weiss.  As I am wont to say, at different stages of their musical careers.  MdaC was around its 40th anniversary.  Louise was on her final year before retirement, performing with various groups around town.  Lenny was yet to take up studies at the Peabody Conservatorium in USA.  Both Louise and Lenny were much admired and much loved.   We also had some horns and clarinets sitting in from NCO.  We played a Mozart symphony, too, but that didn't appear in the recording that is now released as Sorrowful song on Spotify and YouTube and Bandcamp and all the other streaming services.  The songs are arias from various operas, from Handel, Purcell, Gluck and Mozart, and the performances are deeply touching.  It was such a pleasure to support Louise in this most tragic of music.  Whatever, it's now released so have a listen and if you wish to support MdC (now Musica da Camera Canberra to support our international presence!), go to Bandcamp and purchase a download.  But do listen.  It's nothing like a joyous pop song, but it's intense and truly felt.  Sorrowful song is our second album and a source of much pride.