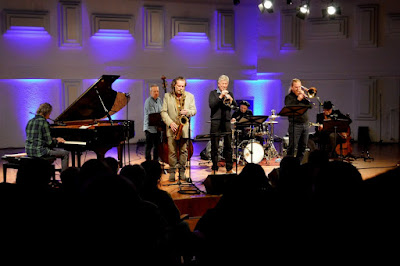 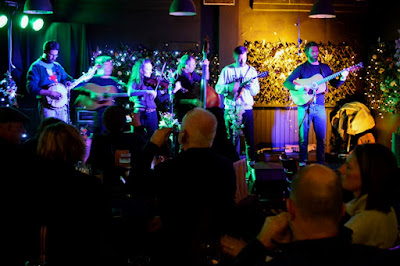 Then old friends Wanderlust.  Now this was amusing as well as inviting and attractive.  Firstly, the tunes are to die for.  We hear a small number mostly at every Wanderlust concert, but I never tire of the colourful melodies and  insistent, somewhat international grooves and the three part front line and the solos.   They are in their 30th year but not playing too much, given Covid.  I imagined them flying by the seat of their pants but this is jazz.  Miro organising, passing or calling for solos, those unique feels, the amusements of James and all, really.  When do you see the saxist putting down his glasses on the stand, the trumpeter picking them up, the trombonist checking them out too, all while a delirious solo is taking place, with all in place for John when he's finished, you can only smile in collusion.  Then glorious startups from Fabian, all percussive rather than drum-styled, an unexpected solo started from Brendan when the audience didn't seem to want an end to the concert, and those delightful and expansive solos and fills from Alister.  Mightily musical but so much more; an intensely joyous event but also just lovely, inviting tunes.  How can you not love this outfit?

And now for something completely different: The Morrisons.  This was classy country/roots/whatever.  Nice harmonies, up feels, fiddle and a string of stringed instruments, banjo, two guitars, a mandolin or similar and bass with slap-style playing. Someone mentioned Australian bluegrass and confirmed the lyrics and stories and compositions were local.  That's good.  I liked this outfit, capable and lively and happy.  Also nice was the location in the Lord Anson pub, so a chance to eat and have a beer.  A very different experience to the church-cum-concert hall events and a chance to chat with neighbours.