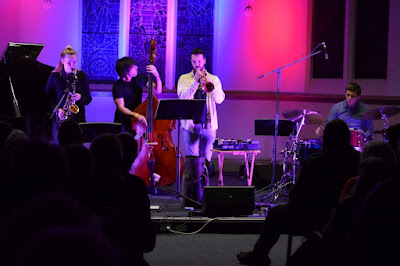 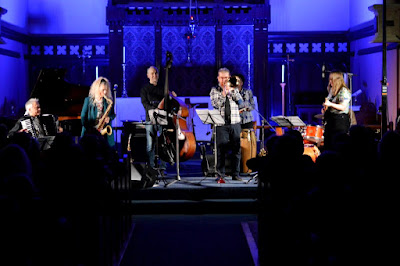 And then to finish day 1 I attended two concerts and stayed throughout.  First up was The Vampires.  They are favourites from some time back and no less today even if they started a little wary on the day.  They've changed and interestingly, as drummer and sole original member on the night, Alex, said, there are many Vampires out there.  This time three of four were unavailable, two overseas and one with Covid.  Noel was new to me on bass but apparently he'd filled this role often enough and looked comfortable.  Tom had some warning of his call so seemed pretty prepared.  Tessie had very little, being a last minute Covid cover.  So it was a tentative start but by the end they were blowing with relative comfort and great joy.  The Vampires are like that.  The grooves are steady and lively and even mesmerising and the heads are genuinely attractive melodies with playful twists.  Tom played with effects which gave a studio feel.  I much enjoyed the interplay of Tom and Tessie and their capable listening on collective improvs.  Collective improvs are not too common, being  trad-styled, but I like the sense of danger and throwing caution to the wind and the challenge to players.  I also enjoyed how Noel approached his solos, not so much creating melody or counterpoint, but exploring and emboldening the rhythm.  Nice playing, increasingly settled and that sense of playfulness that I enjoy from The Vampires.

And finally, The catholics.  Note the spelling, of course.   Here's another band that's been around for yonks.  And another band that entertains, playing attractive tunes with virtuosity but keeping the pleasure in the listening.  But I was somewhat surprised by a meditative, pensive band this night, less excitable than I remember.  Just gloriously soft and pensive to start, although they wound up to Wes Montgomery later.  Hilary Geddes was sitting in and her inventiveness and versatility were self-evident.  Sandy was her eternal joyous and virtuosic self as is ever our venerable James on trom.   Fabian and Hamish lay a more rich rhythmic underlay given drums and percussion and it's always pleasant and strange that more don't take this path.  I guess there's more to pay, though.  Gary mostly played accordion but took to the grand piano beside him occasionally.  Lloyd oversaw the group as host and bassist.  There is always joy in a catholics concert and this also had a pensive side.  Lovely.