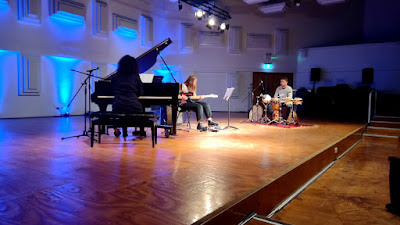 Off to another church for a paring that was much longed for and much loved.  Andrea Keller playing with Sandy Evans.  Two stars of the Australian jazz firmament, female to follow the blokes of the dark patterns.  Yes, this was more hopeful but that wasn't particularly what I heard.  Rather, it was occasionally playful and meditative, somewhat visual and explicative but deeply mostly communicative and open to each other.  I needn't say they were musically inventive and capable, they are renowned for this, but I melted with Sandy's clearly spelled melodies and rich flourishes (sadly sometimes quiet so could be lost) and varied tonalities and I was floored by Amanda, who I have only seen rarely, with her chordal plays, not arpeggios but phrasings repeated and moved, like birds, spelling a phrase then repeating, altering, developing.  Just stunning playing and done with such intimacy and joy.  And to top it off, a piece written for and dedicated to Miro Bukovsky called Polar bird.  I have no idea how the title came to be, but it was a lovely tune.  To be so honoured!  An endearing, personal, intimate concert by two deeply telling players.

Then Hilary again for something very unexpected, Visions of Nar.  If I'd kept up with news for Sydney I shouldn't have been so surprised.  Margossian was a name I'd noticed but I didn't know of her band with Jeremy Rose playing music of female energy and Armenian mythology.  All grooves and mind blowingly quick phrasings played unison, dotted 16th notes (or thereabouts, with the dotted note following if I heard right; quite odd to Euro ears) in scales that also sounded odd to my ears, and those tabla-like percussion outings, sometimes steady, often with glorious rhythmic and tonal percussion colour.  I was entranced, not least by Hilary's versatility and sitar-like effects and Zela's leadership and presumably compositions.  And interestingly, the crossover to jazz which seemed most evident in later track/s. Too bad that Jeremy Rose was absent with Covid and was to be missing for some other outings, too.